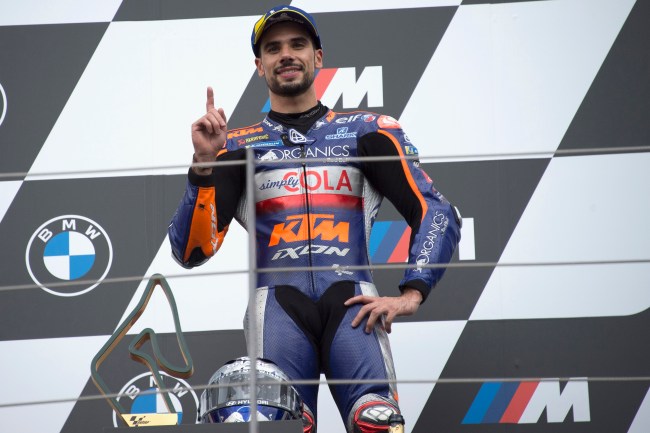 I’ve never had a step-sister. I’d estimate that 90% of what I’ve learned in life about step-sibling relationships I’ve learned from websites ending in ‘hub’ so in that context, this story doesn’t seem all that outlandish. However, once we dive into the details it’s obvious that this is one of the craziest relationship stories during a time when the news has become so unpredictably volatile it’s hard to keep track of whether or not the aliens have landed yet because anything can and will happen this year.

😶 "MotoGP rider Miguel Oliveira is engaged to his stepsister Andreia Pimenta, his dad has revealed. “I’m happy that my son is getting married to the woman of his life,”…..“Before love there was a great friendship. We grew up together,”
https://t.co/NH92C8NNII

According to the article on the New York Post, MotoGP racer Miguel Oliveira is officially engaged to his step-sister. This news was made public by Miguel’s father. And the newly-engaged couple were actually in a secret relationship for 11 years before going public last year (2019) and have known each other since they were 13 years old.

I know you have questions. No, they are not from Alabama and that joke is tired. It’s Mississippi that we make fun of these days. Here are some highlights from the article on the Post:

The couple, who have known each other since they were 13, had a secret relationship for 11 years before going public in 2019. Pimenta, 24, is the daughter of Oliveira’s father’s second wife, Cristina, and it was the driver’s dad, Paulo, who revealed the exciting news.

“I’m happy that my son is getting married to the woman of his life,” he told Marca.

Oliveira himself previously opened up about falling for his stepsister before admitting they had planned to wed this year.

“Before love there was a great friendship. We grew up together,” Oliveira told Manuel Luis Goucha. “At some point we realized that it was more than a friendship, it is a very strong love. We were going to get married this year, but that weekend I had a race and we had to postpone it next year.” (via)

Miguel Oliveira is a Portuguese pro rider on the MotoGP circuit where he finished 17th overall in 2019. In 21 MotoGP starts he has 1 win and 1 Podium. At the Moto2 World Championship level, he has 6 wins and 21 podiums across 50 starts.

According to his Wikipedia profile, he’s currently studying to become a dentist while racing on the MotoGP circuit which sounds incredibly ambitious to me. This guy’s just full of surprises.