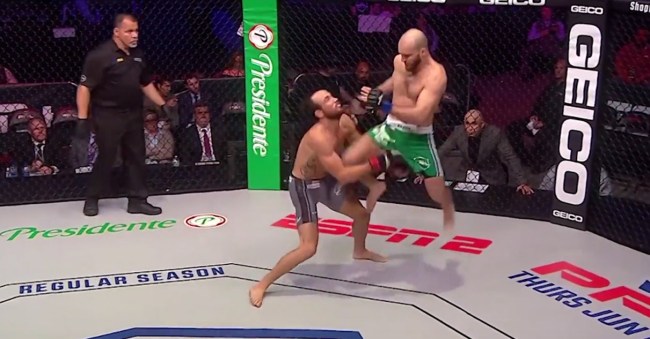 The average fan is probably not very familiar with the Professional Fighters League. It used to be known as the World Series of Fighting until a name change in 2017. It’s pretty much what the name conveys, the first professional MMA organization where fighters compete in a regular season, post-season, and a championship.

The eight fighters with the most points in each weight class get to compete in the playoffs. In 2018, champions in the six PFL weight classes took home $1 million.

The 2019 Professional Fighters League season just completed week number two at the Nassau Coliseum, Long Island Thursday night, and those who were watching certainly got to see something that almost never happens in an MMA fight.

Just 10 seconds into one of the preliminary card fights, Movlid Khaybulaev knocked out his opponent Damon Jackson in spectacular fashion with a rarely-seen, perfectly-delivered flying knee knockout.

I know we’re only in May, but if anyone can top that for 2019 knockout of the year in the coming months I definitely want to see it.

With the knockout, Khaybulaev moved to 14-0 in his MMA career and more importantly, earned the respect of many in the MMA community.

😳 YOU NEED TO SEE WHAT FOLDED HIM LIKE THAT pic.twitter.com/gONKdPhnSd

My word, Movlid Khaybulaev just landed a vicious flying knee on Damon Jackson. Painful to watch. If you aren’t watching PFL, put on ESPN2 right now for the replay.

That might be the closest thing to a decapitation I’ve ever seen in the cage.

Check it out in slow motion…