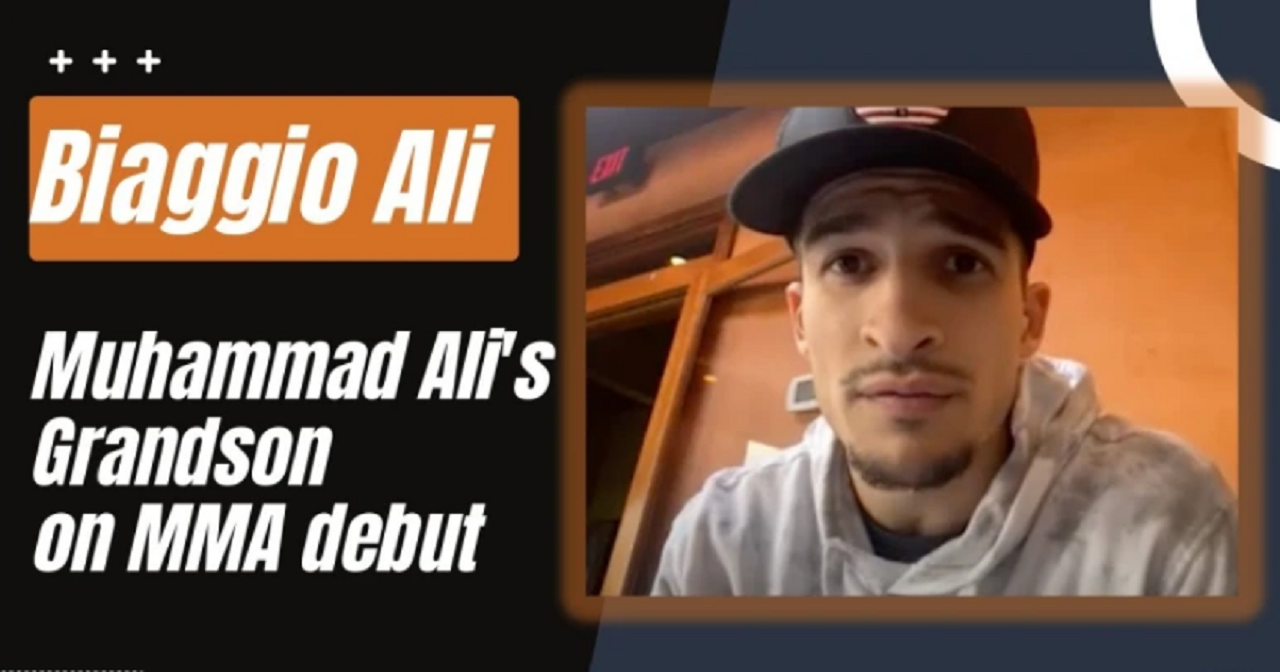 Muhammad Ali’s grandson, Biaggio Ali Walsh, will make his MMA debut on Fusion Fight League’s Rumble Under the Rims card this Friday, June 3 which is set to air live on Fite TV.

🚨🚨The grandson of #MuhammedAli makes his amateur #MMA debut THIS FRIDAY at @fflmma Rumble under the Rims.@BiaggioAli1234 faces Devin Rothwell in Billings, #Montana – LIVE AND INCLUDED WITH #FITEplus.

We sat down with Ali Walsh to talk about his upcoming MMA debut, how he got into the sport, and his overall goals in MMA.

First, we asked why Biaggio decided to take up MMA instead of boxing like his famous grandfather and his brother Nico Ali Walsh.

“When I was always growing up. I was always a fan of martial arts and boxing. At the beginning of high school, I really started to like MMA just because of the different aspects of fighting. The wrestler versus the boxer, the boxer versus the karate guy, the karate guy versus judo guy. I really like the idea of a mixture of tools to use in a fight. So I just fell in love with that idea.”

Biaggio currently trains at Xtreme Couture but first started training on his own during the start of the pandemic in 2020.

“I started training early 2020, but of course, Covid hit, and the pandemic hit, so it kind of delayed it. So during that time, I would train in my garage, and I would meet up with some friends and do mit work and stuff, but when the gym opened back up, I resumed the training. I trained every day and I started taking it seriously. I’d say 2021, like mid-2021.”

As for his fighting style, Ali Walsh, who admires Israel Adesanya, describes himself as a striker but is ready to wrestle at any time.

“I like to strike, but I’m ready for whatever. If you want to wrestle, let’s wrestle. You want to grapple? I wrestle more than I do strike sometimes, just so I can be comfortable in that space.

“Lately, I’ve been watching a lot of Israel Adesanya. It’s just amazing watching him. It’s like watching Leonardo DA Vinci paint. So he’s one of those guys that I’ve recently been really watching and studying.

Biaggio admits to feeling the pressure of following in his grandfather’s footsteps but says that he’s been able to deal with it head-on at an early age during his high school years.

“Me and my brother both. We feel the pressure all the time and anything that we did if it wasn’t MMA, if it wasn’t boxing, if I was playing tennis, I would feel pressure just because of who I’m related to.

“What I went through with high school football and College football. Obviously I was at Bishop Gorman, which was a renowned team in school for football and the media was crazy because I was doing so successful there. So every time I played a game in high school I felt immense pressure to do good and I feel like it helped me a little bit because it introduced that to me at such a young age. So I’m used to it for sure.”

As for his MMA goals, Ali Walsh just wants to improve and make it to the big leagues one day.

“I know I haven’t had my first fight yet, but so far it’s changed my life for the better. It’s made me think more positive. It’s giving me the confidence I never thought I had. I feel more spiritual, emotionally, mentally, physically attached to the universe and God. It’s helped a lot, but with the sport, I don’t care where I go. I just want to go somewhere. I want to make a name for myself, become a champion somewhere. I don’t care if it’s Bellator UFC PFL. LFA, ONE FC it doesn’t matter to me. I just want to go somewhere.”