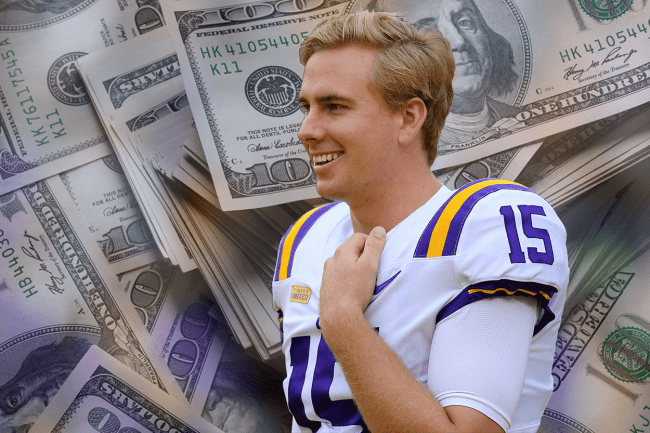 As a four-star quarterback in the Class of 2017, Myles Brennan chose to play at LSU instead of staying in his home state of Mississippi. The Under Armour All-American Game captain joined the Tigers with a lot of hype but ultimately never reached the heights that he had hoped.

In turn, the 23-year-old suddenly retired from football on Monday morning ahead of his sixth year on the collegiate level. He was in a quarterback battle with Garrett Nussmeier and transfer Jayden Daniels for the starting job during the spring and fall camp but ultimately projected as the third string.

BREAKING: LSU QB Myles Brennan is walking away from football, a source has told me. Brennan was informed that he will not be the starting Quarterback this fall.

Brennan played in 18 games over four healthy years at LSU, starting three with a 1-2 record. He completed 60.2% of his passes for 1,712 yards on 121 completions with 13 touchdowns and 6 interceptions.

Although his sample size was small, he had a lot of hype coming out of high school and did not play poorly. Brennan was not a total bust, but he never really shined either.

Entering the 2022 calendar year, the first season under Brian Kelly, there was initial belief that Brennan would be the guy. As a result, he was able to ink a few deals for his Name, Image and Likeness.

Brennan went viral in February for his hilarious TikTok video with Walk On’s Bistreaux, which was one of five deals. He also signed contracts with Smalls Sliders, Smoothie King, Raising Cane’s and Hollingsworth Richards Ford.

Although the financial compensation and terms of the deals are undisclosed, they likely paid enough to live comfortably as a college student.

Well, what now? What happens to Myles Brennan’s NIL deals?

Brennan is now retired even though he didn’t play a single game since signing his deals. That means that even though he never took the field for the Tigers during a regular season game in 2022, he likely gets to keep the money.

Brennan probably received some, if not all, of the money for his deals upfront. And since NIL contracts cannot be tied to performance, the deals remain valid despite the fact that he will not be playing.

There may be ways to void the deals now that Brennan is retired. It may be possible that some of the deals had terms that were tied not to performance, but to actively being part of the program.

The odds that Brennan’s contracts ever become public are next to zero, so there is a slim chance that we will never know the answer of what happens next. However, it seems nearly impossible that a company could take back money that it has already paid out.

That means that likely Brennan got his money during the spring and summer as he competed for a starting job, retired, and still gets paid.

This is an unprecedented situation that is likely to change the future of NIL. Deals, if they don’t already, will use Brennan as an example to tie players into deals that include a clause about being on the team. Or something like that.

Whatever ends up happening, because surely something will change, Brennan’s decision is the first of its kind on such a significant level. It makes things very interesting.