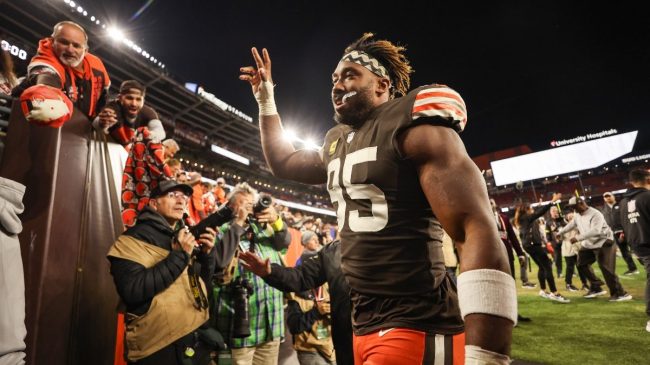 On Monday, a scary incident happened involving the Cleveland Browns star, Myles Garrett. After leaving practice on Monday, Garrett was involved in a one-car wreck that sent him and a passenger to the hospital. Luckily, no life-threatening injuries were sustained, however, more details about the accident have finally emerged.

Myles Garrett Swerved His Car To Avoid Hitting An Animal

According to Tom Pelissero, Myles Garrett was discharged from the hospital Monday night. The Browns star avoided life-threatening injuries. However, it’s reported that “he swerved to avoid an animal on a wet road and overcorrected. [The] car flipped multiple times.”

#Browns star Myles Garrett was discharged from the hospital Monday night, per source.

More tests coming. The good news is Garrett’s injuries aren’t life-threatening. He swerved to avoid an animal on a wet road and overcorrected. Car flipped multiple times. Could’ve been worse.

The situation could have been substantially worse. Luckily, Garrett and the woman who was with him are going to be okay and they can move on from this scary incident. Anyone who lives in an area that is heavily populated by wildlife will understand just how common something like this happens. There are some speculating that Myles Garrett is somehow lying about the accident. Those people clearly have no idea what they’re talking about.

At the end of the day, we’re just glad the Browns star is safe. It’s a reminder that everyone is vulnerable at any given moment. Garrett was simply leaving the practice facility and on his way home.

For now, Myles Garrett’s status for Week 4 is up in the air. The Browns are likely to monitor him throughout the week to see if he can play. Don’t be shocked if Garrett is given a week off to recover.