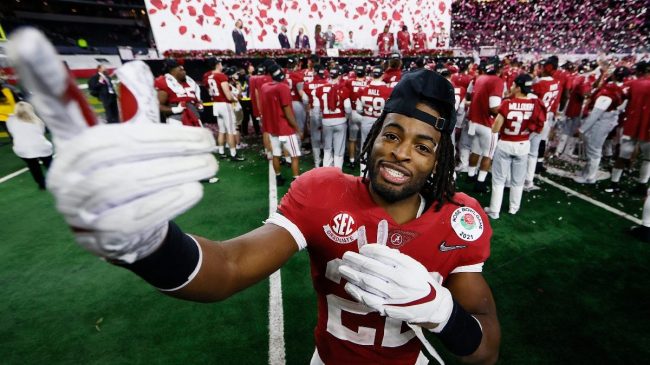 There is no question how talented Najee Harris is at football. He’s grown into a star for the Pittsburgh Steelers, but before that, he was loved and cherished by the Alabama Crimson Tide. However, in a hilarious interview with Caleb Pressley, the star running back may have admitted he was paid to play in college before the NIL deals came to fruition.

Najee Harris Might Have Accidentally Admitted He Was Paid By Alabama

The interview starts out with a funny question about Najee Harris getting in a fistfight with Nick Saban. Somehow, it ends up going in a direction he likely wasn’t expecting. Caleb Pressley mentions a rumor about Harris getting paid by Alabama during his time with the Crimson Tide. That’s when things spiral out of control.

Does Najee Harris owe Alabama some money back for missing 2 weeks with the team? @calebpressley pic.twitter.com/yWMvfyAONh

Harris couldn’t help but laugh it off, as he may have accidentally spilled the beans that Alabama had paid him every month. Although that’s the case, Najee Harris very well could have just slipped up his words. Either way, Pressley does a great job of changing the subject before things got truly out of hand.

With NIL deals taking over the college sports landscape, this might not be seen as a big deal like it used to be. However, the NCAA could still look into it if they wanted to. If anything, this could be a stain on Nick Saban’s career at Alabama. However, that is strictly speculation for now.

We’ll see if anything happens from Najee Harris potentially admitting he was paid in college. This may not even be enough for the NCAA to investigate. Either way, college football fans are sure to look at Nick Saban and Alabama a little differently.