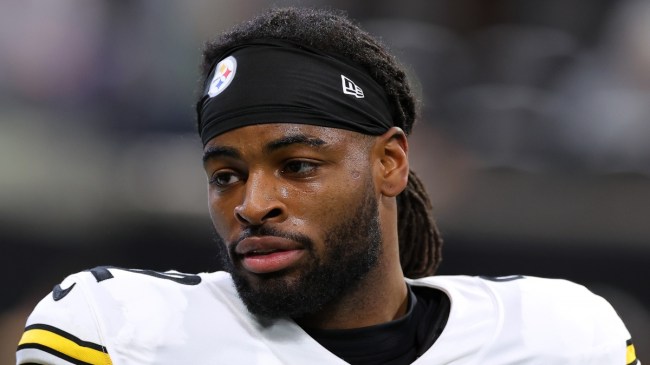 The Pittsburgh Steelers are in the middle of taking on the Atlanta Falcons. It’s a close game right now but all eyes are on Najee Harris. During one of his rush attempts, the star running back threw a nasty stiff arm on a defender. It was so monstrous that it might be the best stiff arm ever.

PFF shares the clip of the Steelers running back essentially Gronk spiking Richie Grant into the ground. Someone needs to check and see if a dent was left on the field. Watch Najee Harris’ nasty stiff arm below.

Najee Harris BURIED him with this stiff-arm ⚰️pic.twitter.com/975CjyZpQo

That’s the type of stiff arm that makes a defender think twice when coming up to make a tackle again. Someone check the Richter scale because Najee Harris might have caused an earthquake.

You can’t do that to people outside of football.

Got thrown so hard he bounced 💀

A play this vicious should reward anyone who has Harris on their fantasy teams.

This should be worth points in fantasy

Look for the Steelers to continue utilizing the run game with Najee Harris in the backfield. Hopefully, the front office can improve the offensive line so we can see more highlights from him down the road. We also just hope that Falcons defender can bounce back from that stiff arm.