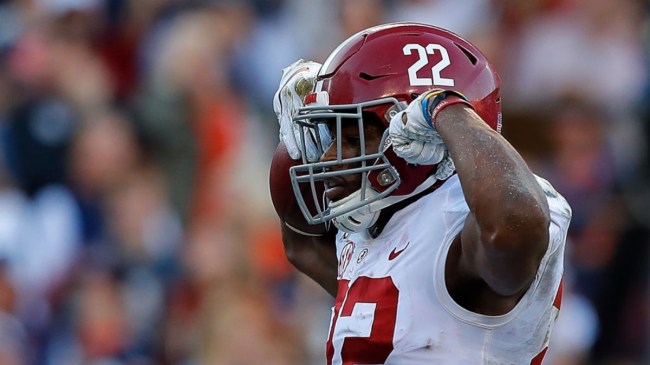 It has been rare in the history of the College Football Playoff for Alabama to not be in contention for a spot at any time in their season. The Crimson Tide have only missed the Playoff once since its creation, but it looks like this year will be the second time the small tournament goes on without them.

With a national title seemingly not a possibility for Alabama this season, it appears one of their former stars is dwelling on last year’s title game.

That game saw Alabama take on Georgia in a game the Bulldogs won 33-18. It was a big win for Georgia, who finally overcame their SEC rival for their first title in the Playoff Era.

It turns out that former Alabama running back Najee Harris wasn’t all that impressed by the Georgia title. He was recently asked about former Georgia receiver and current Steelers teammate George Pickens’ comments about the competition he played against at practice in college and he responded by taking a shot at the Bulldogs’ title.

In answering a Q about George Pickens’ observation that he practiced vs. first-round defensive talent at UGA, Najee Harris called Georgia’s natty “weak ass” bc Bama receivers were hurt.

Pickens told me: “Bryce threw a pick-6. He was a Heisman winner, too. Weak? I don’t know.”😂 pic.twitter.com/78YbQdnahz

I’m gonna talk a little s–t, because Georgia, their staff came from Alabama. Their whole stuff is from us. He got that stuff from us. Really, he [Pickens] is just following the leader. He got his weak ass natty [national championship], let him have that.

It’s a weird reason to give to discredit the Georgia title. They have a couple of coaches that have ties to Alabama, but there is plenty of their staff with little or no connection to their rival.

The reality is that Georgia has built themselves into a real threat to Alabama in recent seasons and the connections between some of their coaches and the Crimson Tide has very little to do with that.