Najee Harris Not A Fan Of Todd McShay’s Scouting Report, Says He Can ‘Kiss My A–‘ 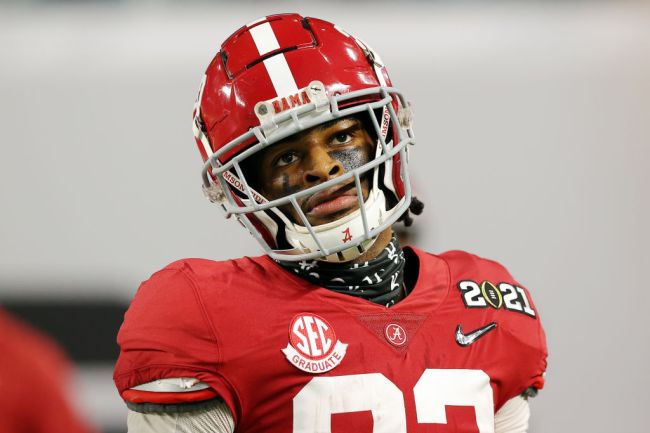 Scouting report season is in full bloom as the 2021 NFL Draft fast approaches. While some draft hopefuls will enjoy hearing their skillsets being talked about by random people over the next few weeks, the majority of players will likely disagree with at least some aspect of what people say about them. Alabama running back Najee Harris is one of those players.

Harris recently joined Adam Schefter on his podcast and the NFL insider read a few scouting reports out there written by his ESPN colleagues. Todd McShay’s scouting report was the one that caught Harris’ attention the most.

“Harris has excellent size and decent top-end speed. He was a much more decisive runner as a senior, showing oily hips for a big back and playing light on his feet. He gets in and out of breaks quickly, has excellent ball security and he’s a slippery runner between the tackles but he has acceleration limitations. Harris showed tremendous improvement as a pass-catcher in 2020 with a big catch radius and an ability to adjust to balls thrown outside his frame. He also shows good aggressiveness in pass pro.”

For the most part, that reads as a rather positive breakdown of Harris’ abilities. The only knock McShay says about Harris’ abilities is his “acceleration limitations,” but other than that, he describes him as a very solid prospect.

Harris didn’t see it that way, however.

Schefter asked him to share his thoughts about McShay’s scouting report and without hesitation, Harris said “I think Todd McShay can kiss my as-” before getting rather defensive.

“I didn’t have an opportunity to show I could catch,” Harris said. “It’s not because I can’t; it’s because I wasn’t in the game to show people I could catch. So let’s just stop looking at the stat sheet and watch the game.”

To Harris’ credit, Alabama was loaded at every single position, including wide receiver, during his time in Tuscaloosa. Nick Saban was more in the business of handing the ball off to his running backs and letting his playmakers on the outside handle pass-catching.