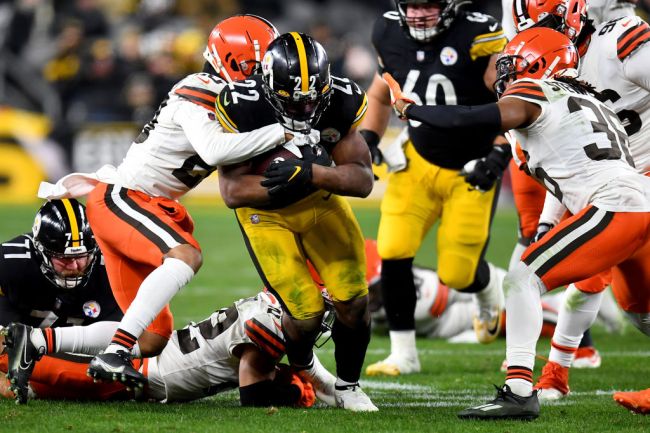 While I have won Fantasy Football championships in the past, this year was simply not my season. Early in the year, I thought I’d CRUISE to a final thanks to a roster that included Matthew Stafford, Nick Chubb, Joe Mixon, Mike Evans, D.J. Moore, and Mike Williams. In fact, for the first month of the season, I was in first place by some distance. But then it all came crashing down.

Sam Darnold and the Panthers became who we thought they were (big Dennis Green energy, RIP), which brought Moore down to WR3 status. Mike Williams decided to stop catching touchdowns. While Joe Mixon carried me for a while, Nick Chubb was an absolute disaster of a first-round pick considering how many analysts consider him to be the best “pure runner” in the league. Baker Mayfield playing with one arm certainly didn’t help, either. Now, while I did make the playoffs as the five-seed — which is really all you can ask for, just get into the dance and see what happens — I was knocked out in the quarterfinals after my team put up literally their worst point total of the season. Pain.

Still, there were, obviously, hundreds of thousands of people who made it to the Fantasy Football championship this weekend, with a staggering number of those games likely decided by Najee Harris’ game-ending, relatively meaningless fourth-quarter touchdown run against the Cleveland Browns on Monday night.

It should come as no surprise that the reactions on social media to Harris’ decisive run ranged from pure jubilation to abject horror.

Najee Harris won me my fantasy Super Bowl.. that is all 🤞🏼😂

Shout-out @ohthatsNajee22 for getting that last second touchdown to give me a fantasy football championship belt 🙏🏻 I owe you big time for that Touchdown Mr Harris…. pic.twitter.com/ZibQtFwDHn

@ohthatsNajee22 i love you so much. Won me my fantasy super bowl on the touchdown run you just earned yourself a life long fan.

A buddy of mine was down 4 points in his fantasy championship game and that #najeeharris run just won him the whole shabang.

His opponent only had Chubb left.

Woke up to great news…. I came back and won the fantasy league championship… I had a 3 percent chance to win heading into the fourth but Najee Harris carried me home … back to back weeks of going to sleep thinking that I lost only to prevail . We did it … 🥲🤞🏿 pic.twitter.com/SnZfZhq9eW

Everyone who just lost their fantasy championship on that Najee Harris TD pic.twitter.com/QBn3snUfMl

Just lost my fantasy championship by .15 points on that Najee Harris run. pic.twitter.com/v671an6LME

Lost my league on that last Najee Harris touchdown. I hate fantasy. pic.twitter.com/1ds7tbidRl

Was up by 5 in the fantasy championship with 1 minute left in the Steelers Browns game. My opponent had Najee Harris. Needless to say I am retiring from fantasy football.

@ohthatsNajee22 . Would’ve won my fantasy football championship for 500 bucks if it wasn’t for that final TD

Look at the glass half full, championship game losers: if your league had a decent buy-in, odds are you still won yourself a solid payout by coming in second place. That’s certainly more than I can say about my squad this year.