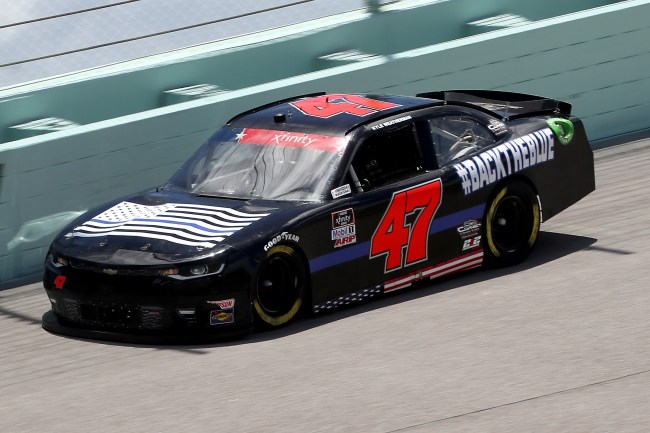 Just days after Bubba Wallace drove a #BlackLivesMatter themed car in the NASCAR Cup Series race at Martinsville Speedway, a team in the second-tier XFINITY Series decided to run a #BacKTheBlue pro-police paint scheme at the Homestead-Miami Speedway this weekend.

On Saturday, Kyle Weatherman’s No. 47 Mike Harmon Racing Chevrolet raced a car with #BackTheBlue written on the backside, while the hood of the car has a black and white American flag on it with a blue line through it which is a symbol of police support.

“A lot going on in the world right now and I wanted to express that most first responders are good people. My uncle is a firefighter and he would do anything to help save lives,”

Mike Harmon Racing supports our LEO’s and First Responders, we THANK YOU for your service, sacrifice and dedication‼️
🖤💙🖤 pic.twitter.com/RTddq7NY20

#MHR #47 Back The Blue Chevy Camaro @HomesteadMiami
Piloted by @KyleWeatherman who will start the #Hooters250 today at 3:30pmET on FOX pic.twitter.com/OBMSGp2Vgz

Absolutely awesome day today in the 47 @MhrRacing car today in the @XfinityRacing unfortunately it was ended early when our transmission broke. Awesome racing with @DaleJr today also👍🏻👍🏻👍🏻 pic.twitter.com/R3h1QsfdJe

Bubba Wallace will be driving the “Black Lives Matter”car in tonight’s NASCAR race because [checks notes] hell has frozen over. pic.twitter.com/iCQTPZ0vTI

After receiving backlash on social media over his car Weatherman tweeted out that he supports black men and women as well as first responders.

Thanks David. I absolutely I support the black men and women of this country and also support all first responders also. LOVE EVERYONE 🙏🏻 https://t.co/SIGrkTaIzC