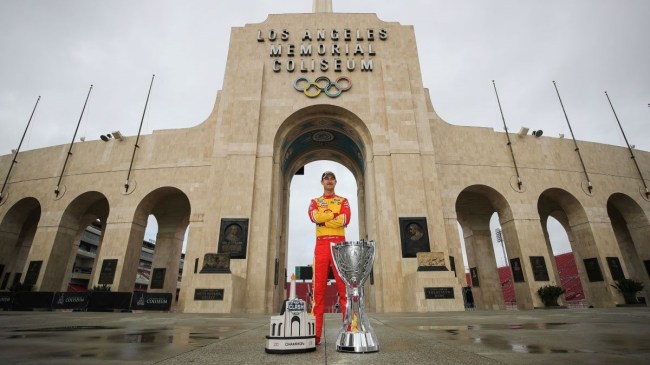 At 32 years old, Joey Logano is now a two-time NASCAR Cup Series champion and a virtual lock for a future spot in the NASCAR Hall of Fame.

But it hasn’t always come easy for Logano, who at 18 years old was billed as the sport’s next big thing. We sat down with Logano after his recent championship win in Phoenix and discussed that pressure, dealing with the expectations, and why fans may not always understand his personality.

BroBible: Walk me through what the last 36 hours have been like for you because I’m sure you’ve been pulled in 30 different directions.

Joey Logano: Yeah, it’s been busy, right? Ever since we won the championship, you know, you’re taking pictures and doing the interviews, and we got to celebrate for a couple of hours, and then we flew here to LA and did more pictures and more interviews. And I believe that’s gonna continue here for the next few hours.

JL: I think that is something that I definitely look back at and say the experience of having pressure, it just makes you more comfortable in that situation. Is it hard? Yes. Do you want to fail? You never want to fail when the pressure’s on and all the lights are on. You hate that.

But when you succeed in those moments, there’s nothing like it. And so just not being scared of failure becomes something very important in life. It’s tough. But it’s fun.

BB: To that point, there are fans and drivers who aren’t fans of the playoff system and would prefer the traditional points system. But you seem to thrive in this system. What is it about the system or your makeup that makes you so comfortable in this high-stakes situation?

JL: I think it’s a mental game. That’s what makes it so special to be able to do it. You have that do-or-die moment a lot. And it’s not comfortable. But I like it There’s a lot of drama in our sport when the playoffs come along. Because there are those do-or-die moments and desperate people do desperate things.

I feel like for me personally, the pressure makes me better. It’s not comfortable. It’s not enjoyable. But it makes me better. I find more out of myself and I believe my team is the same way and that attitude is contagious throughout our whole race team.

BB: Switching gears here. You’ve not always been the most popular driver with fans, as I’m sure you know. Whether it’s your aggressiveness or your personality. But it feels like that’s started to change in the last year or two. Have you noticed that and is that something you appreciate?

JL: I’ve just gotta be myself, right? You can be somebody else as much as you want, but fans see right through that stuff. For me, who I am, yeah I’m a competitive person. I want to win really bad. That’s kind of the main goal when you’re out there though.

I have an aggressive mentality that goes along with that. That’s part of it.

Now, I think the part where it gets confusing for everyone is that when I get out of the car I switch that off. Because that’s not the way I want to live my life. And I think for a lot of people that’s hard to understand: that you can be one person in a race car and be a different person when you get out of the car.

But for me, it just feels normal. And that balance is very, very important in my life. And I want to enjoy it, right? I want to enjoy what I do. But I want to win even more than that. And so of course some of that comes with some ruffled feathers every now and again if you want to say it. that way. But that’s just life. It is what it is.

BB: And then lastly, you talked about how important it was to have your son (Hudson) there to watch you win a championship. What was that moment like having him there with you in the car after the race?

JL: For the lack of better words it was just cool. Hudson and I have a special relationship together. We share a lot of the same interests. Especially as he’s getting older now. He loves cars a lot.

We’re very similar together with respect to classic cars and burnouts and he’s a little “Mini Me.” So to celebrate together with him and my wife was special. To watch him run and go get the checkered flag was just so cool.

And really honestly the next morning is what was probably one of the coolest things because he was talking so much about it. The next morning it was just me and him for a little bit before (his) mom woke up and he was just talking about it and it was just really cool.

Portions of this interview were condensed and edited for clarity.