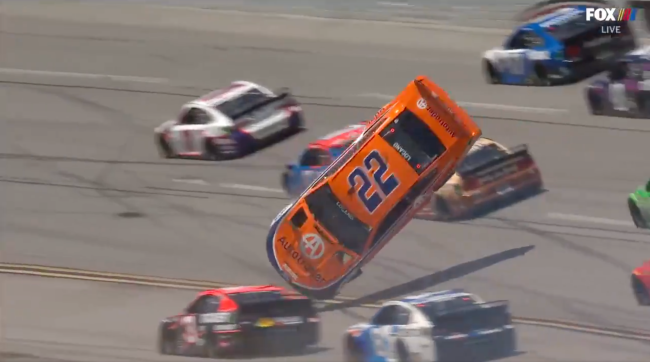 Very few things in life are more American than 500 tire-burning miles at Talladega Superspeedway. As one of the biggest, most historic events on the NASCAR circuit, the party begins well before the weekend. IT’S ‘DEGA BABY!!!!!!! With the festivities comes plenty of fanfare and there is no lack of excitement or patriotism before, during or after the race.

THIS IS ‘DEGA. THIS IS AMERICA. 🇺🇸pic.twitter.com/2CbpafjK3I

And there is certainly no lack of jean shorts.

With up to 175,000 (probably drunk) fans packed into the grandstands and in the infield, the drivers are fired up to bring home the win and mayhem is sure to unfold like it did on Sunday. The first chaotic moment came in the first stage when Harrison Burton left his pit with the fuel can connected to his car, forcing Tyler Riddick to make a quick dodge to avoid further damage.

That was a CLOSE call 👀😱 #Talladega pic.twitter.com/pb3gfrWKrL

Not long after, at the end of the first stage, things got crazy. On lap 60 of 188 total, Matt DiBenedetto was leading the field, followed by Ryan Blaney, Logano, Denny Hamlin and Ricky Stenhouse Jr. Hamlin, in the No. 11 car, pushed Logano into the bumper of Blaney in the No. 12 car. With Stenhouse in the No. 47 car caught up to Hamlin’s bumper, Hamlin tried to move out of the line to the inside. Stenhouse then made contact with Hamlin, who turned into Logano and set off a scary chain reaction. Logano flipped upside down and slid down the track before popping back upright. It was a breath-taking moment as he went completely airborne, but thankfully, Logano was okay.

Here what sent Joey Logano up and over at Talladega: pic.twitter.com/NP8zgz6dWB

Joey Logano gets airborne and goes for a WILD ride at Talladega! pic.twitter.com/7E9vCyqCZD

The wreck itself wasn’t quite “The Big One” that Talladega fans have come to expect, but the footage was absolutely terrifying. Bubba Wallace wasn’t far behind the crash and Logano flew right in front of his windshield. His view was truly insane.

Things were so wild that Wallace might have soiled himself.

Bubba Wallace: "I'm telling you, my underwear is worse than the car right now." pic.twitter.com/HjHAhl0vTx

Everybody but Logano was able to continue racing and Wallace was nearly unscathed. Incredible.