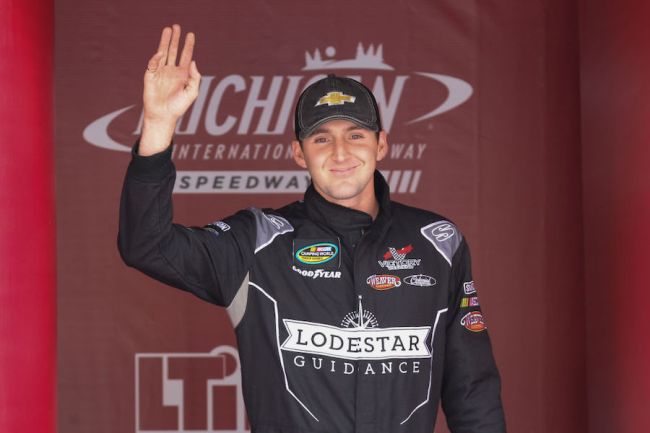 Only 2020 can bring the world a story about NASCAR, a breakfast Toaster Strudel, and an “unintentional” Swastika frosting.

NASCAR driver Josh Reaume was suspended indefinitely this week after posting a photo to Snapchat of his breakfast.

The frosting on Toaster Strudel allegedly looked strikingly similar to the Nazi Swastika.

Reaume attempted to explain the incident this week in an interview.

“What happened was, I made a toaster strudel, I put icing on it. I put icing on it arbitrarily. I can — now, that this has become such a significant thing in my life, everything is crystal clear now in what I was thinking.

I was mindlessly putting icing on a toaster strudel thinking about how I was going to arrange to get my daughter to day care in the morning because that’s my responsibility and I was flying out to Phoenix the next day.

“When I was done, I took a picture, I wrote, ‘Snack time,’ and posted it to my Snapchat, which I had no idea it was even more than my immediate friend group. [The account is] private, it’s not even under my name, to my knowledge.

Now, shame on me for maybe not fully understanding SnapChat, and I don’t care to get on social media in the immediate future, but somebody obviously screen-shotted it or did something with it and pushed it to NASCAR.

A photo of the alleged strudel circulated the web and was reported on by Jalopnik.

Jalopnik later updated their story saying that this photo is old and does not belong to Reaume. The driver doesn’t have a copy of the photo and doesn’t know how to obtain a photo to fight his case.

Reaume stated he’s incredibly sorry for the incident and had to delete his Twitter account due to “the incredible rate of hate-filled tweets” sent his way.

“From the absolute deepest part of my heart, I extend my condolences for how their families suffered,” Reaume stated. “And I apologize how anything that has come out has offended them or stirred up memories or brought pain into their lives.”

While the NASCAR suspension is indefinite, Reaume said he’ll complete sensitivity training in an attempt to race again. If he sticks to the plan in place, he could be reinstated before Daytona in February.