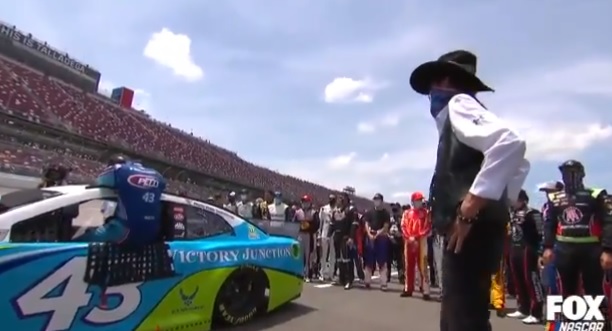 Less than 24 hours after a noose was reportedly found in Bubba Wallace’s garage at Talladega, drivers showed their solidarity with Wallace by pushing his car onto the front of the race track before Monday’s race.

After a noose was found in his garage stall last night, @NASCAR drivers show their support for @BubbaWallace at Talladega. #IStandWIthBubba pic.twitter.com/uFlxmP27qa

NASCAR and FOX went on to deliver a powerful message about equality before the start of the race on Monday.

A despicable act by someone flying directly in the face of NASCAR’s efforts to build a culture that is diverse, equal and welcome… Racing is the great equalizer, everybody is 6^4 240 pounds, everybody has 600 horsepower, no one is white, black, or yellow. They are all racers, and they are all our heroes

As of now, there’s still no update on who put the noose in Wallace’s garage.

NASCAR president Steve Phelps: "We don't have a lot of answers at this moment."

Timeline: Crew member from the 43 discovered the noose yesterday afternoon. He informed NASCAR. Security got involved. NASCAR notified FBI this morning and they are on site. "Early stages of this."