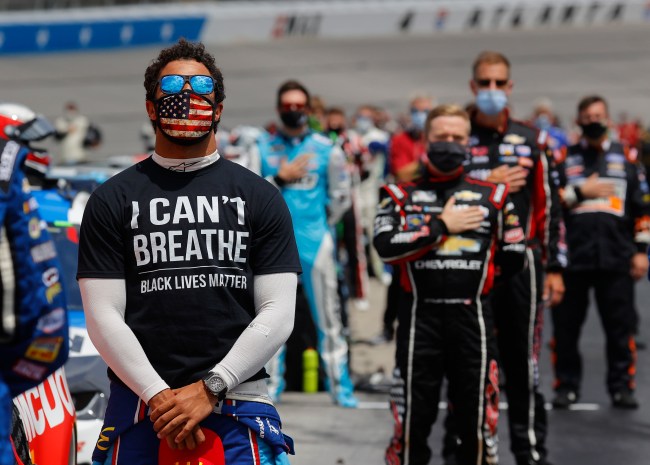 Black NASCAR driver Bubba Wallace is being harassed for being vocal in favor of the Black Lives Matter movement.

Earlier this month, Wallace was able to convince NASCAR to ban Confederate flags from all events.

NASCAR drivers have joined the growing list of athletes and sports leagues throwing their support behind the nationwide protests against police brutality.

"We are trying to deliver the message across, listen and learn," says NASCAR driver Bubba Wallace. https://t.co/dP88eNKB2i pic.twitter.com/vSsu4UrRUM

“My next step would be to get rid of all Confederate flags. There should be no individual that is uncomfortable showing up to our events to have a good time with their family that feels some type of way about something they have seen, an object they have seen flying.

No one should feel uncomfortable when they come to a NASCAR race. So it starts with Confederate flags. Get them out of here. They have no place for them. The narrative on that before is I wasn’t bothered by it, but I don’t speak for everybody else. I speak for myself. What I am chasing is checkered flags, and that was kind of my narrative.”

Bubba Wallace wore an “I can’t breathe” shirt, and will drive in a car painted with Black Lives Matter art in tonight's NASCAR race.

He’s the only full-time black driver in NASCAR. pic.twitter.com/GtTZiLKqLL

On Sunday in Talladega, somebody hung a noose in Wallace’s garage stall according to a statement released by NASCAR.

A statement from NASCAR just now: "NASCAR was made aware that a noose was found in the garage stall of [Bubba Wallace's] team. We are angry and outraged, and cannot state strongly enough how seriously we take this heinous act. We have launched an immediate investigation…" pic.twitter.com/VS32udPeR7

Yes, this could have been an outsider, but under the pandemic restrictions the chances are MUCH higher that it was someone on the inside, a crew member or track hire. I'm very confident in saying that they are about to discover that the NASCAR garage is done harboring trash.

NASCAR says it will work with law enforcement to determine if any crimes have been committed.of a noose being placed in Bubba Wallace's garage stall.

Wallace never saw the noose, ESPN’s Marty Smith reported. It was first seen by a member of Wallace’s team, who immediately brought it to the attention of NASCAR, Smith reported.

Wallace released a statement saying that he wasn’t going to let someone intimidate him and will continue to be vocal against racism.

Earlier in the day, several fans protested the Confederate flag ban on the streets of Talladega.

People protesting nascar’s decision to ban the confederate flag…one of them said “if my flag offended you, you have made my day”…but it’s heritage not hate right? #nascar pic.twitter.com/vXfbe3nPdq

I still can't get over "DEFUND NASCAR" like it's a school board or something pic.twitter.com/LWVnl9GOk6

Marty Smith of ESPN says NASCAR is looking for the person responsible and will ban them from the sport for life if found.

An angry @MartySmithESPN reacts to noose being found in Bubba Wallace's garage at Talladega on ESPN "It pisses me the hell off, and it pisses everybody else in the sport off who care not only for Bubba but for every single person he's standing up for" pic.twitter.com/dWfvpPInmK