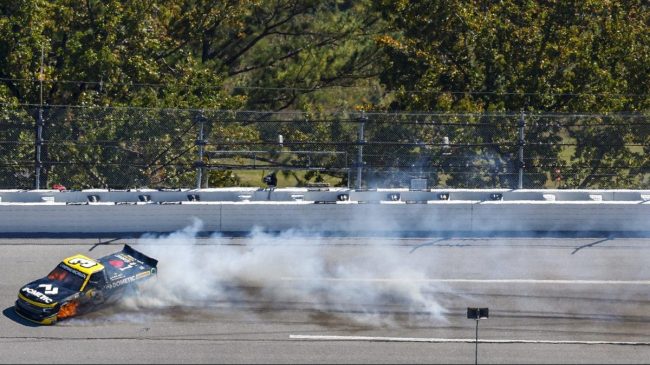 NASCAR Camping World Truck Series driver Jordan Anderson was airlifted to a hospital on Saturday after an insane, death-defying crash.

Anderson was running in the Chevy Silverado 250 at Talladega Superspeedway when the engine in his No. 3 truck failed. That engine failure led to a huge fire than filled the truck with smoke and flames.

Anderson attempted to slow the truck, but the flames persisted. The 31-year-old then managed to steer the truck to the inside wall. He was able to undo his seat belts while doing this and jumped out of the moving, flaming truck just as it collided with the wall.

The video of the incident was even crazier than you could imagine.

Oh my god, I have never seen something like this before. Jordan Anderson was jumping out of the truck before the wreck was over. They stated that he suffered major burns & is in a lot of pain. He is being airlifted to a local hospital. Praying for Jordan. #NASCAR pic.twitter.com/KTCVPmkelC

Jordan Anderson that was the most wild thing I’ve ever seen in a NASCAR sanctioned race. pic.twitter.com/VrpWhknwoI

Anderson managed to get out of the truck safely. But he did reportedly suffer burns despite his firesuit. FOX pit reporter Jamie Little reported Anderson was airlifted to a Birmingham hospital for further evaluation.

An update on Jordan Anderson after his crash at Talladega Superspeedway. He is being airlifted to the hospital in Birmingham. pic.twitter.com/ECzr3XejgE

As of the time of writing, there is no further update on his condition. But race fans were shocked by the fiery incident.

One of the scariest incidents I’ve ever seen. 🙏🏻 for @j66anderson https://t.co/Amm3eknUEO

This was so terrifying. His truck was on fire and he was being burned, so he started getting out before it was stopped. He was airlifted to a hospital. #NASCAR https://t.co/P4TOVoITXG

Oh my goodness!!! Very scary moment! Too many fires in #NASCAR recently!! https://t.co/zKoV6gQxTE

NASCAR has seen a number of scary accidents in 2022. Cup Series drivers Kurt Busch and Alex Bowman are both currently out after suffering concussions in wrecks. That’s led some of the sport’s top drivers to call for major changes.

NASCAR has thankfully not had a death due to a crash since Dale Earnhardt in the 2021 Daytona 500.