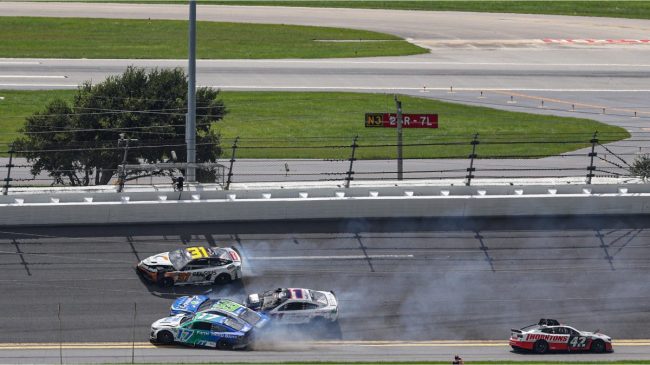 NASCAR drivers are not happy following a huge wreck around the 140-lap mark at Daytona. With just 21 laps to go in the Coke Zero Sugar 400, rainy conditions led to a massive pileup involving more than 20 drivers.

When all was said and done, officials had to pull out the red flag and put a hold on action.

Check out the insane video below.

BIG CRASH in Turns 1 and 2 and Daytona!@austindillon3 SOMEHOW avoids all the mayhem and comes out in the lead! #NASCAR

Senior VP of Competition, Scott Miller, came out to talk about the lead up to the accident, saying that NASCAR was tracking the weather before an afternoon storm rolled overhead.

“We were on top of the weather, monitoring it with the turn spotters, the spotters up top, and the pace car, and we had all the information that we thought. We’d been dodging a little bit of weather, obviously, for a little while. Nothing had hit and all of a sudden there was that shower…. If you watched the end car, you could see that some rain definitely started right before they wrecked, but we couldn’t really do anything about that.”

NASCAR drivers are livid after wreck at Daytona

NASCAR drivers aren’t happy with officials not waving a caution prior to that massive wreck at Daytona. Many are saying that there was more than a lap to make a call, but they ignored the rain.

Justin Haley spoke about it shortly after the incident, calling it “unacceptable.”

He was the leader

Daniel Suarez says there is nothing a driver can do in that situation and that drivers shouldn’t be put in that situation with the systems that NASCAR has to determine if the track is wet: pic.twitter.com/9EfmJZNRBw

Kevin Harvick: "I think (#NASCAR's) making it up as they go. It’s just one of those deals.”

This video was taken right before the accident. It does appear to be raining pretty significantly.

I believe it was raining @bobpockrass @nascar @nascaronnbc pic.twitter.com/UzP1LzIHE7

NASCAR has said they’d like to finish the race. We will continue to update as the day continues.

**Update** Austin Dillon, who’s No. 3 car can be seen narrowly escaping harm in that massive pileup, would go on to win the race.

Related: NASCAR inks sponsorship deal with the University of Alabama