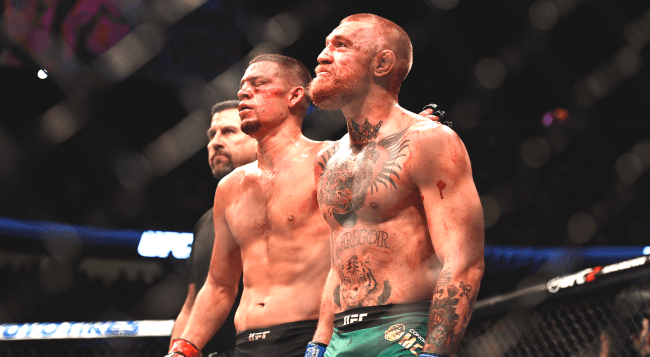 Conor McGregor and Nate Diaz have one of the most entertaining rivalries in sports. The two MMA legends go around pretending to hate one another and in turn each of them gets loads of free publicity because we’re all suckers.

Much like when people drive by the scene of a car accident they have to slow down and look, it’s the same for when McGregor and Diaz communicate publicly. We simply can’t stop slowing down to watch how bad the collision will end up being.

On Tuesday, Nate Diaz got the ball rolling again when he responded to a tweet posted by Conor McGregor on August 31 in which “The Notorious One” randomly posted a photo of the two fighters facing off with the caption, “Now add 30 pounds of muscle onto me and say ding ding in a Dublin accent.”

Now add 30lbs of muscle on to me and say ding ding in a Dublin accent. pic.twitter.com/ZvWN9vHvri

Diaz took a day, but eventually fired back with his own response on Twitter, “Bruh you can’t walk or fight right now, why you talking sh-t?”

“Who can’t? Come thru and see you little skinny fool you be smacked up and rolled up you bum. Calis mine,” McGregor fired back.

And off to the races they went.

That means I’m the double triple champ of this whole shit fuck all you pussies ..

Into the belly when I get ya

He fled the cage and I boxed his whole family around. And nobody finished me mate. I broke MY leg. No one or nothing else done anything to me. And anyway. Don’t worry bout them. I’m here in Cali months doing what I want. It’s 3 on the street now mate fuck your little sport.

I’m on a hair trigger mate. You stay where you are in hiding if you know what’s good for you bro. God bless ya kid have a good day 🙏 👋

Fuck the whole city I am 🦍 #bye

Bones heal. Blunt force trauma to the brain? Not so much. #seeyouwheneveriwant pic.twitter.com/rlDbWUFmQ4

Don’t be terribly surprised if sometime before the end of 2022 McGregor and Diaz finally end up finishing their trilogy. The last time they fought, at UFC 202 in August of 2016, they broke the record for the highest selling pay-per-view in UFC history. Even if they are a combined 2-6 in their last 8 fights. The hype for such a fight will be off the charts.