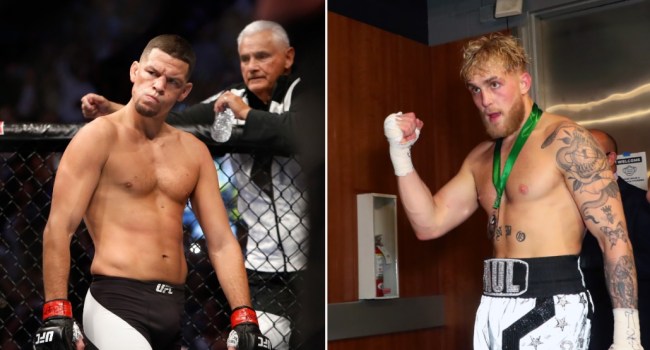 Nate Diaz does not appear to be a fan of Jake Paul and his antics.

“What the fuck is up, you Irish cunt? Good morning, Conor McGregor, I know you’re probably beating up old dudes in a bar right now, or maybe you’re jacking off because you’re sick of fucking your wife, I mean, she’s a four, Conor, you could do a lot better. But happy Monday! My team sent you a $50 million offer this morning! $50 million cash, proof of funds, the biggest fight offer you’ve ever been offered.

“But you’re scared to fight me, Conor, you’re duckin’ me ‘cause you don’t wanna lose to a fuckun’ YouTuber. You’re 0-1 as a boxer, I’m 2-0 as a boxer. I just came off the eighth-biggest pay-per-view event in history. But you wanna fight Dustin Poirier, who has less followers on Instagram than my f***ing dog — that’s a fact.

After the video went viral, Diaz took to Twitter to deliver a blunt message

You saw what happened to the other Nate. https://t.co/Uq5LY2tQaS

And Diaz immediately fired back.

@LoganPaul check this little ho bitch before someone does