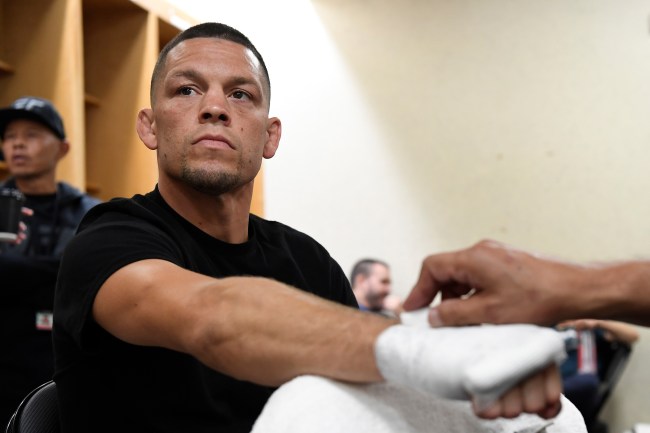 It appears that next week’s fight between Nate Diaz and Jorge Masvidal for the BMF title could be in jeopardy.

This afternoon, Diaz took to Twitter to announce that the fight was off after he was informed that he tested positive for a “tainted supplement”. Diaz goes on to call out USADA, claiming that he only eats and drinks natural supplements.

I’m not gonna make it out to NYC for fight week next week because they say I might have tested with elevated levels that they say might be from some tainted supplements. I call false on that because I only take Whole Foods or natural food supplements. I don’t even eat meat. So until UFC, USADA or whoever is FUCKING with me fixes it, I won’t be competing.

“I’m not gonna play their game and try and hide it or keep it quiet, as they suggested. I’m not going to have my name tainted as a cheater like these other motherfuckers who keep quiet until after the fight just so they can get paid. Fucking cheaters.

“I don’t give a fuck about some money over my dignity and my legacy. I’m not playing along with this bullshit. I’m not staying quiet and figuring it out after the fight. That’s cheating. So fight game I’ll see you when I see you.

“Sincerely, the realest baddest motherfucker in the game.”

UFC PR seems to be caught off guard by Diaz’s announcement.

I have reached out to UFC PR in regards to Nate Diaz's comments, according to PR they are "looking into this" #UFC244

Investigating Nate Diaz's tweet, like all MMA media I'm sure. Nothing to report yet, but I'll say, what happened to Nate's older brother Nick crossed my mind. Don't forget a commission once banned Nick for LIFE for smoking weed. Nate might be a little distrustful of these bodies.

UFC 244 is set to take place next week and it seems like the UFC is prepared to go forward if Diaz is out.

Been told the UFC have had a replacement on standby in case of injury or unforeseen circumstances scuppering Jorge Masvidal vs Nate Diaz.

That man is none other than Leon Edwards.

He’s been paid to be in training camp and is likely the front runner to replace Nate. #UFC244

You not the baddest mofo in the game (i am) but you are one of the cleanest mofo’s @NateDiaz209 I’ll see you nov 2. I know your name is clean. I don’t need @usantidoping to tell me shit!