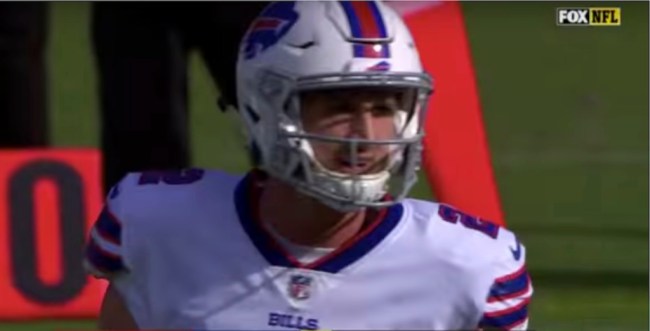 Given the fact that, in his first 79 career passing attempts, Nathan Peterman tossed nine interceptions — which, according to FTW.USAToday, was the highest-rate of any quarterback in NFL history since 1975 — it’s pretty remarkable that this guy keeps getting a look by teams. The latest? The Oakland Raiders, who were rumored to have an “interest” in Peterman the other day, but, today, made his signing official.

I’ll leave my personal opinion out of this one — except for the fact that this is absolutely absurd to me. However, as you might imagine, the Internet, specifically Twitter, oh, they had plenty of jokes, reactions and all around befuddlement at Nathan Peterman joining the Raiders. Here are some of the all-time best, especially when considering just how God-awful Peterman has been in his NFL career.

First Mack. Then Coop. If this Nathan Peterman signing isn't an even bigger sign that Gruden is purposely fucking the Raiders idk what is. I hate him.

Not sure who’s more surprised the Raiders signed him. The other players or Nathan Peterman himself…?

Nathan Peterman was funny when he wasn't on my team https://t.co/7G1ueBGyCP

Nathan Peterman's a hero. Imagine being that bad at your job and yet keep getting hired. Dude's amazing and you really need to stop slagging him.

How we suppose to create a winning culture adding losers to this team. Nathan Peterman is a loser. Add some mfs that know how and want to win all I’m saying. But what do I know.

Nathan Peterman must have a brilliant personality.

Nathan Peterman is the Hue Jackson of Quarterbacks

How is this man Nathan peterman still getting signed… he is proven garbage… rather sign ochocinco as my backup QB https://t.co/2N4w0bl4BW

Guys, Nathan Peterman has become the butt of every single joke about bad quarterbacks for the past two years. The Raiders, who don’t even know where they’ll be playing next season as they prepare for a move to Las Vegas, have been the butt of bad football teams for the past two years. Somehow, the football gods just decided to come together and play a little end-of-the-year joke on all of us, putting together two things that just seem to belong together. We should appreciate such humor, no matter how piss-poor of a decision as this actually is.

After the Raiders traded Khalil Mack and Amari Cooper, and now decided to sign Nathan Peterman, it’s pretty obvious that fans should be in store for a long, longer, OK, the longest rebuilding project known to man. It’s a good thing head coach Jon Gruden, an apparent “quarterback guru”, has a 10-year deal, otherwise he’d be kicked to the curb so fast after these asinine moves.