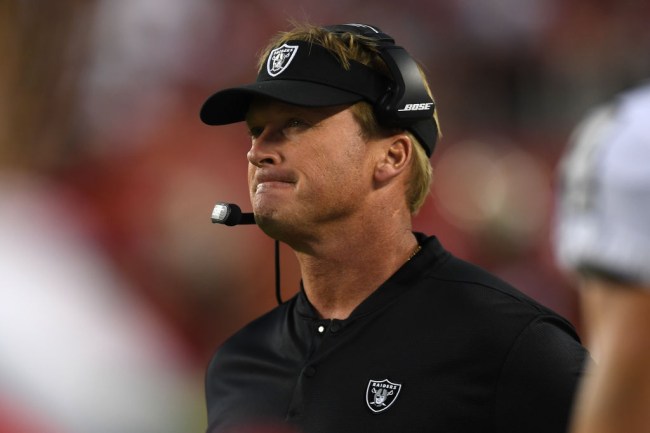 Last month, the Nathan Peterman Era officially came to an end in Buffalo after the Bills realized Nathan Peterman is not a good quarterback and has no real business on an NFL field.

There was much rejoicing amongst Bills fans, who had previously started a GoFundMe to raise money for Peterman’s retirement for reasons that were perfectly highlighted in a heartwarming tribute someone put together to celebrate his terribleness.

Peterman had a 4:1 interception-to-touchdown ratio during his time in Buffalo, and even though he’s only been in the league for two years, it’s hard to imagine any teams would be willing to make space for him on their roster (especially when Colin Kaepernick is still on the market).

Luckily for Peterman, there’s one NFL coach who’s never let things like “logic” or “reason” get in the way of his decisions: Jon Gruden.

Gruden signed an absurd contract with the Raiders at the start of last year and former players were quick to issue a warning to everyone who’d be playing under him.

He helped usher in his arrival with a boneheaded draft pick and followed up the move by trading away Khalil Mack, who was arguably the best player on the team and has gone on to have a season that’s surprised nobody but Gruden himself.

However, it appears the coach is on the cusp of making the most Jon Gruden move of all time based on a report that he’s interested in pursuing Peterman.

Nathan Peterman is drawing a lot of interest from teams. Per source, his next stop is with the #Raiders. Jon Gruden is very high on the former #Bills QB. Wouldn’t be surprised if he landed on the team’s PS.

It appears Gruden has been high on Peterman before the quarterback entered the league and proved you have to be high to be high on him.

Jon Gruden was "very high" on Nathan Peterman before he ever landed with the #Bills. This is from his ESPN QB Camp before the 2017 Draft. https://t.co/l3ctMMRD0W pic.twitter.com/e6ZEZysGws

The Raiders are currently chilling with the Cardinals at the bottom of the NFL standings with a 3-11 record, so while it would be tough for the team to get much worse, that’s not going to stop Gruden from giving it the ol’ college try.