Jon Gruden To Be Officially Announced As New Coach Of The Raiders, Contract Details Are Insane 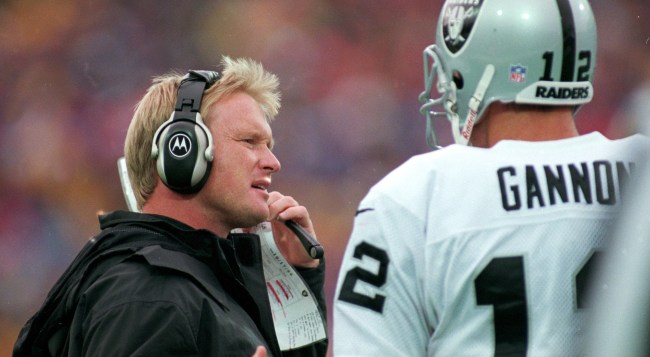 In a move literally EVERYONE expected, just not today, current ESPN broadcaster Jon Gruden will be returning to the NFL coaching ranks as he will be officially announced as the new head coach of the Oakland Raiders on Tuesday at a “splashy” new conference.

On Tuesday of this week, Gruden hinted that he “might” be a candidate for the job. On Wednesday, he claimed that the Raiders were “still looking” for a head coach. Nice try, Jon, but you fooled literally no one.

Breaking: Jon Gruden will be introduced as the #Raiders head coach Tuesday, in a "splashy" news conference, I was informed by a team source.

All along there have been rumors about not whether Gruden would once again become the head coach of the Raiders, the team he went 38-26 as the coach of from 1998 to 2001, but HOW MUCH he was going to get paid, complete with rumors of him receiving an ownership stake. Gruden was pretty clear that he was NOT getting a stake in the team’s ownership, but based on the contract Adam Schefter claims Gruden will be receiving he will have more than enough money to buy a stake once he retires.

Raiders are giving new head coach Jon Gruden a 10-year contract, the longest coaching deal in NFL history, sources tell ESPN. The deal is likely to be worth about $100 million.

Gruden also coached the Tampa Bay Buccaneers from 2002 to 2008, compiling a 57-55 record with a win in Super Bowl XXXVII over, yep, the Oakland Raiders.

Rumors of Gruden assembling his coaching staff for his second run with the Raiders have also been running rampant with Gruden’s former QB Rich Gannon rumored to be taking the job of Quarterbacks Coach.

As Jon Gruden called around to round up assistants, one name kept coming up as a QB coach: Rich Gannon. He has the #Raiders game today 🤔🤔🤔

The #Raiders coaching staff under Jon Gruden will be the most expensive in @NFL history: Jon Gruden will make $100M over 10 years. Coordinators are getting 4 year deals, sources say. 2 years in Oakland, 2 in Las Vegas.

Oh yeah, did you forget that the Raiders are moving into a brand new state-of-the-art stadium in Las Vegas soon?

Easy to pay a coach when you’re getting $750M in free money for a stadium.

That’s right. Gruden, coaching the Raiders, in Vegas. This is going to be so fun.