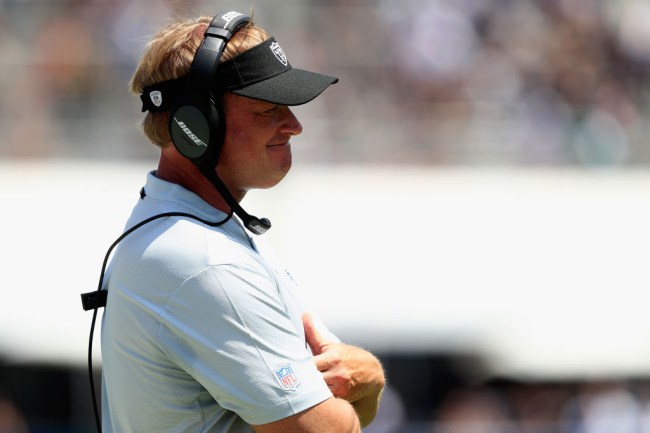 Earlier this year, the Oakland Raiders decided to bring Jon Gruden on as a head coach for reasons I’ll never entirely understand— especially when you consider one of the first moves he made after accepting the position.

Gruden didn’t exactly have a ton to work with when he agreed to take the helm but he did have at least one valuable asset in the form of Khalil Mack, a three-time Pro Bowler who was by far the best player on the Raiders squad.

Mack was just one of a few athletes who held out this summer in the hopes of getting a new contract— a move that appeared to rub Gruden the wrong way.

As a result, the coach-turned-analyst-turned-coach-again decided the linebacker was more trouble than he was worth.

Gruden decided to send him to the Bears for a few draft picks (including two first-rounders) and got much less than he was worth in return and shocked almost everyone in the process— including his quarterback.

Mack has been on fire this season and fans have taken great pleasure in mocking Gruden as his former player takes the Bears defense to the next level.

Who in the hell would ever trade Khalil Mack? Oh. I see. pic.twitter.com/p2rfRkC2ds

There’s a chance the draft picks the Raiders got in return for Mack will eventually pay dividends, but as things currently stand, it looks like they got the raw end of the deal— which has shocked basically no one besides Gruden himself.

According to NFL.com‘s Michael Silver, Gruden got a reality check on Sunday after discovering Mack had scored yet another strip sack and revealed he’s basically the only person on the planet who’s surprised by his dominance:

Jon Gruden sat in the coaches’ area of the home locker room at the Oakland Coliseum on Sunday morning, scrolled through his cell phone and got some decidedly disturbing news.

“Damn — Khalil Mack had another strip sack?” Gruden asked rhetorically, shaking his head at the Oakland Raiders assistant coaches in his midst. “Are you … kidding me?”

The Raiders did manage to get their first win of the season after the refs basically screwed the Browns out of a victory so at least Gruden can take some solace in that.