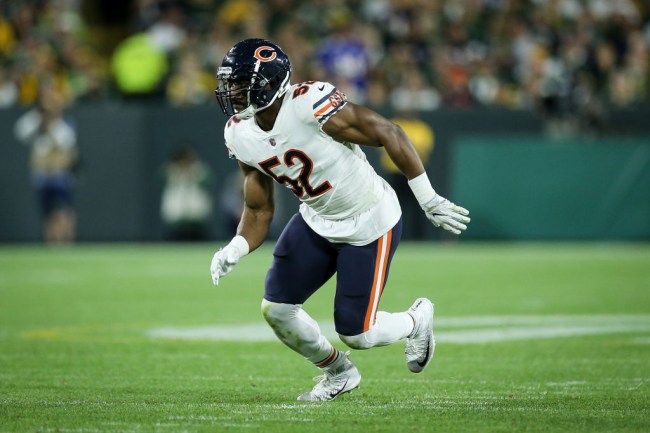 Mack made his debut with the Bears against the Green Bay Packers on Sunday Night Football, and while Aaron Rodgers ripped his team’s heart out, Mack was as good as advertised. The Buffalo product stripped the ball from Packers backup DeShone Kizer and later in the same quarter intercepted a Kizer pass for a 27-yard touchdown. He’s one of those ‘good for the league’ guys whose talent descends team loyalties.

Fellow defensive beast Von Miller dueled against Mack twice a year when his Broncos played the Raiders and instead of undermining the hype surrounding a rival, Miller praised the Mack’s freakish ability–so much so that Miller was shocked that the Raiders let him walk for a package that included two first round picks.

“I was shocked,” Miller said in a conference call with Raiders beat reporters. “I always felt like Khalil and Aaron Donald and JJ Watt were untradeable guys. Then they traded Khalil. Guys like Mack come around once every lifetime. You want to keep guys like that.

“I’m a player, and I’m sure the Raiders ownership had great reasons to make the decisions they made, but you want to try and keep a guy like Khalil and have him play with our organization a long time.”

Tarik Cohen on Khalil Mack this week: “he’s built like a Greek God”.

Raiders defensive end Arden Key is tasked with picking up the slack now that Mack is gone. He knows he has big shoes to fill.

“He does everything pass-rush-wise. He has great feet, great bend, great get-off. Any pass-rush move, he’s capable of doing it. When you go on Madden and build a defensive end, that’s him. He’s a freak of nature.”

Khalil and the Bears have a shot at redemption on Monday Night Football against the Seahawks. Pray for Russell Wilson.