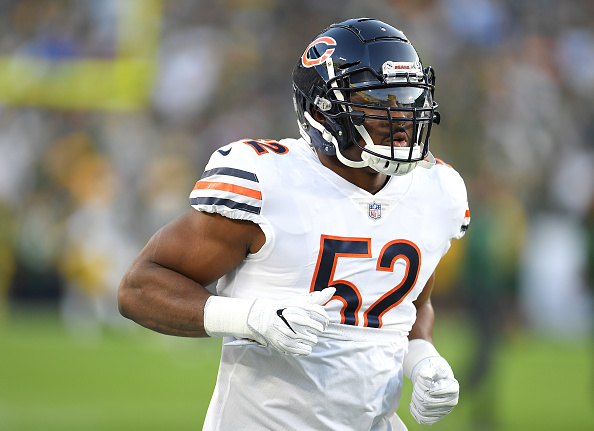 “It wasn’t my goal to trade Khalil when we got here. One of the reasons I’m here is because of him.” Says it was a contract standoff. Economics/salary cap factored.
We have waited. We waited and waited, and the Rams game was looming,”. “Our feeling was he was not going to report anytime soon. Like I said, I saw the Redskins go through it with Kirk Cousins, this long process. You can wait it out. You can franchise him. You can force him to play. But we made a decision and we’re going to stand by it.

“We made an offer. I don’t believe we were anywhere close to where the Bears were. The Bears made us an offer that we thought was really unique.”

Eventually the Bears pulled the trigger on the trade and immediately made Mack one of the highest paid players in the league.

The move has already paid dividends in the team’s first game as Mack has wreaked havoc on the Packers offensive line and picked up two turnovers including a pick-six in the first half of the game.

Khalil Mack strips DeShone Kiser, forces his first turnover as a member of the Chicago Bears. (via @NFL) pic.twitter.com/PP4zn8avNb

Khalil Mack getting right back to where he left on and DeShone Kizer picks up right where he left off with the interception pic.twitter.com/h8WAXA2tUo

The Internet went on to roast Jon Gruden after Mack’s impressive first half vs the Packers.

Who in the hell would ever trade Khalil Mack? Oh. I see. pic.twitter.com/p2rfRkC2ds

Everyone laugh at Jon Gruden

The 30 for 30 on Jon Gruden trading Khalil Mack is going to be great.

LOL GET A CAMERA ON JON GRUDEN IMMEDIATELY

Here’s a live look in at Jon Gruden… pic.twitter.com/ihXrDeolwP