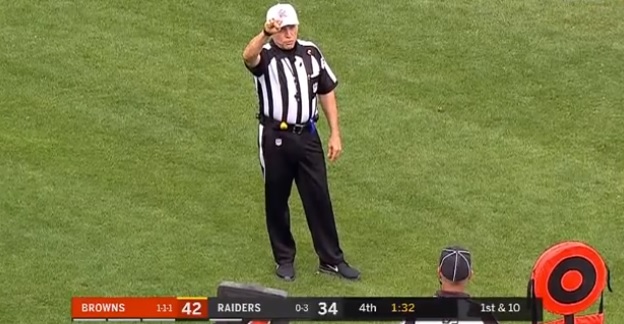 The Cleveland Browns had to two pretty big calls go against them that allowed the Raiders to come back and send the game to overtime.

With 6 minutes and change in the fourth quarter, Browns defensive end Myles Garrett appeared to force a fumble after stripping Derek Carr but for whatever reason refs felt that Carr’s “forward progress” had stopped.

The replay shows that the refs clearly made a mistake and that it was an obvious fumble.

game should be over and Browns win bc this was fumble pic.twitter.com/OVXdlhUZVo

Later in the game, the Raiders, who were down 7 points at the time, were given another break when refs somehow overruled a Browns first down on replay which forced the team to punt the ball.

@NFL horrible reverse spot call gonna cost us the game! These refs are sooooooooo baaaddddd! How do you reverse the most subjective call on the field when there is absolutely no evidence to overturn??! Call on field was first down by a nose. Game should be over! pic.twitter.com/TLebAdrMLA

Even Fox Sports analyst Dean Blandino was baffled by the call.

Reaction of FOX’s Dean Blandino after refs blow another call and make a ridiculous overturn says it all. pic.twitter.com/g4F7VoO4hB

The Raiders were able to march down the field and score a touchdown to extend the game into overtime and Browns fans were pissed.

Congrats @NFL refs. You have literally fixed this against the browns. A blind person wouldn’t even overturn that

A game-sealing first down spot for #Browns is respotted to the confusion of former head of NFL refs Dean Blandino. Raiders still live. My tweet atop this chain on life support.

There shouldn't be overtime. Carr's fumble that WASN'T and the Browns first down that WASN'T. The refs have some explaining to do. https://t.co/pA5ecdb8Pu

Refs really screwing some teams over today. Browns should have had this one wrapped up already with the Hyde run.

With @NFL having a stake in gambling, is it any shocker the refs overturned a call that would have seen vegas lose big to give the raiders a chance to cover??? #Browns

Update: The Raiders were able to win the game in overtime and Browns fans were even more pissed off than before.

Jon Gruden is on the board! pic.twitter.com/A0GdWiK3ZJ

As a coach I never try to blame poor officiating for a loss, but this was inexcusable. The @NFL better have consequences for these refs, because the Browns were straight up robbed.

Hearty assist by the refs in Oakland tho. That Carr fumble they prematurely blew dead should have ended the game. And I say that as somebody who picked the Raiders to win today.

Beyond disgusted!! Refs stole that game!! How do you win when the refs are overturning calls!! Can’t wait for @NFL to admit another mistake with officiating yet it doesn’t change anything for us!! #OAKvsCLE #Robbed

I don’t like to complain about the refs but wow did they job the Browns today. The fumble recovery blown dead and somehow turned into a non-fumble (??) and then the reversed spot that would have sealed the game..

That’s robbery man, those refs were on something tonight