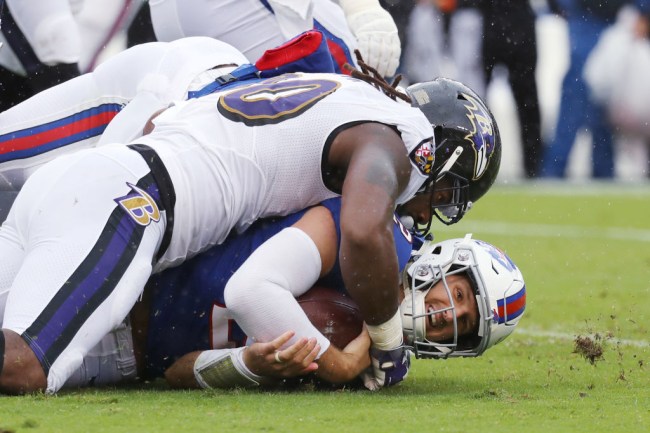 Last year, the Buffalo Bills managed to make the playoffs for the first time since 1999 as stores in the area frantically scrambled to stock folding tables and lighter fluid so Bills Mafia could celebrate in the way only Bills Mafia knows how.

Unfortunately, all good things must come to an end and the team is now a certified bad thing. The Bills are currently chilling with the Jets at the bottom of the AFC East with a 3-7 record thanks in no small part to the efforts (or lack thereof) of Nathan Peterman.

Peterman is basically the poster boy for why it’s insane Colin Kaepernick is still a free agent and is so bad at football that some fans were willing to fork over their own money if it meant they could get him to retire.

After two torturous seasons with the team, the Bills finally realized the error of its ways and released the quarterback on Monday. Jon Gruden is still an NFL coach so there’s a chance he could end up on another roster but I have a feeling it might be a while until we see Peterman on the football field based on stats like these.

After eight games over two seasons with the @buffalobills, the Nathan Peterman era in Buffalo is mercifully over. 🤷‍♂️ pic.twitter.com/sgxZaTNWWU

To celebrate the end of Buffalo’s endless nightmare, I decided to take a few minutes to round up some of Peterman’s most impressively horrible moments in honor of his departure.

There’s no better place to start than his first ever NFL start last November where he burst onto the scene in a big way by somehow managing to throw five interceptions before being yanked from the game.

Of course, that’s just a sampling of the Nathan Peterman Experience.

The Nathan Peterman experience, everyone pic.twitter.com/zKDmVZRhGv

If you bet on Nathan Peterman to throw an interception, you’re in luck pic.twitter.com/6SgTyI3V48

Someone also took the time to put together a lowlight reel if you have a couple of minutes on your hands.

So long, Nathan. Gone but not forgotten (as much as Bills fans wish they could forget).