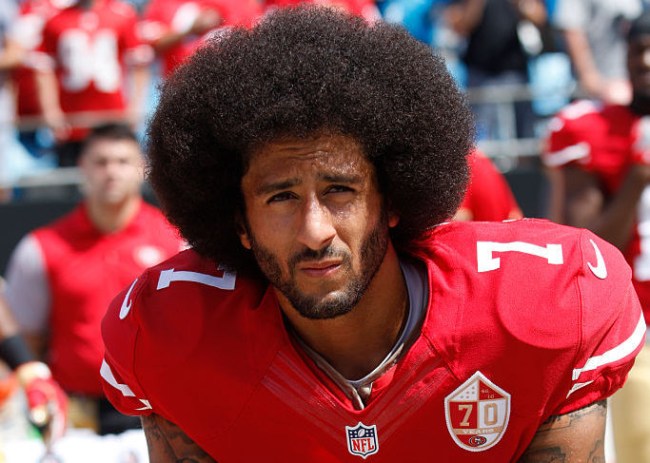 Last month, the world was reminded that Mark Sanchez is still a professional football player when the Washington Redskins took a look at all of the options on the market and somehow decided he was the best one.

In fairness, Sanchez was only signed to back up Colt McCoy, who had earned a starting spot after Alex Smith suffered a gruesome leg injury (he continues to battle some seriously scary complications stemming from the initial surgery).

The Redskins reportedly never considered Colin Kaepernick before pursuing Sanchez, who somehow found himself back on the field for the first time in a couple of years last week after McCoy was knocked out of the game with a broken leg.

The team made it very clear they could care less about extra baggage when they signed a player who was only released by another team because he was arrested for domestic assault.

As a result, Kaepernick seemed like a prime candidate as the Redskins began to hunt for a QB yet again after McCoy went down but Jay Gruden made it clear he wasn’t in the running, claiming the embattled athlete wasn’t a good fit for the Redskins offensive system:

“There’s not a lot of time to get a brand-new quarterback and system installed in a couple of days. He’s been talked about, but we’ll probably go in a different direction…

I’ve been writing on the internet for almost a decade now and during that time I’ve learned a lot about humanity, like the fact there is nothing people love more than telling you that you’re a fucking idiot for having an opinion that differs from their own.

That was the case after that article hit the internet, as it didn’t take long until I got a message that read (in part):

“If you knew anything about football you’d know that Sanchez’s style is a much better fit for the Redskins.”

Is it a bit petty to save the receipts? Perhaps. But I’m glad I held onto this one.

On Sunday, Sanchez put that valued reader’s hypothesis to the test against the New York Giants in a game that would see him yanked in the third quarter with the Redskins trailing by a score of 40-0.

Mark Sanchez's stat line before being benched for Josh Johnson:

Sanchez was replaced with household name Josh Johnson, who most recently played for the San Diego Fleet of the Alliance of American Football.

Twitter was quick to respond with a few fun facts.

Josh Johnson, who hasn’t played in the NFL since 2011, is about to come in and play quarterback in place of Mark Sanchez. Because Washington.

Josh Johnson said he was playing in a charity basketball game in Oakland last Sunday and legitimately had to play Madden this week just to learn teammates’ names. #Redskins

The Redskins would score two touchdowns with Johnson at the helm, which was apparently enough to earn him a starting spot.

If you’re not familiar with Johnson (and I’d be shocked if you are), he entered the league in 2008 and his scouting report noted he was a mobile quarterback with a solid arm who possessed the ability to scramble and use his agility to pick up yardage,

Hmmmm. That kind of sounds like a guy he once shared a depth chart with while in San Francisco.

A timeline of Josh Johnson

At this point, it’s clear the Redskins were blatantly lying when they tried to explain why they wouldn’t sign Kaepernick, who would have probably been a better choice than someone with a similar playing style who hasn’t seen the field since we were still mourning the death of Ned Stark.

The last time Redskins QB Josh Johnson threw an NFL pass before today was December 11, 2011. At that time:

A lot of people who know things about football seemed to agree.

Sanchez has now been benched. Coaches should be held to their quotes. If they said they evaluated and thought that Mark Sanchez and Josh Johnson are better than Colin Kaepernick, even if we know it’s nonsense, they should take heat for their inability to evaluate QBs. https://t.co/V3WWCbpXWe

Josh Johnson's first play as a Redskin was a designed QB run, but Jay Gruden swore to us all that they couldn't sign Kaepernick because of the system.

The football excuses for not signing Colin Kaepernick are "he wouldn't know the offense" and "he hasn't played in a while." Washington is now playing Josh Johnson, who was signed four days ago and hasn't thrown a pass in an NFL game since 2011.

Josh Johnson's last NFL throw came in 2011. The last NFL quarterback he was a regular season backup for was … Colin Kaepernick.

Johnson is a Jim Harbaugh disciple having played at USD and the 49ers. And apparently is more "system ready" for Gruden than Kaepernick. Un. Real. https://t.co/bOxKmsNkTv

According to Yahoo Sports, Kaepernick— who hasn’t been contacted by a single NFL team— is still willing to play for the Redskins despite the blatant disrespect they’ve shown.

I’m sure it’s only a matter of time until they call him.