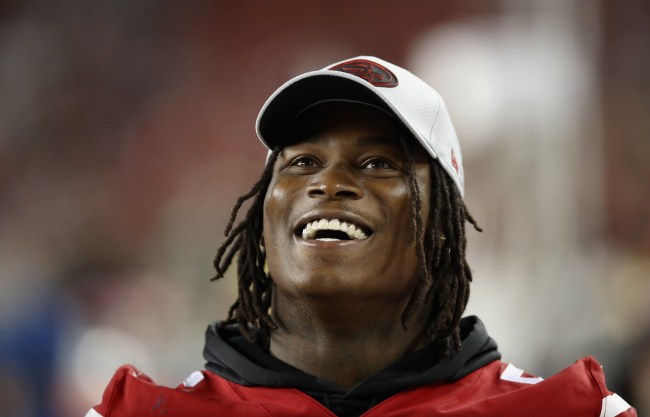 The Washington Redskins have a long and storied history that hasn’t really been in existence in my lifetime. Sure, I respect the Joe Theismann’s and Doug Williams’ of the world, but, in the past 25 years, the team hasn’t really done sh*t — well, other than piss people off by refusing to change their team name, but that’s a story for a different day.

Well, the Skins found a new reason to make people upset today after they claimed troubled linebacker Reuben Foster off of waivers from the San Francisco 49ers, a move that caught many fans by surprise given the severity of Foster’s release from the Niners the other day. For those unfamiliar with the situation, Foster was arrested on a charge of misdemeanor domestic violence just three days ago, and has had problems staying out of trouble even before he entered the NFL. That didn’t stop the Niners from taking a chance on him in the 2017 NFL Draft, though, selecting him No. 31 overall.

With the Washington Redskins formally signing Foster, they sent out a statement to justify the addition of the troubled linebacker, tweeting this out to fans.

While that may have been an attempt to quiet any noise, it may have made things worse, because Twitter let the Washington Redskins have it, completely laying into them for being hypocritical by signing a guy involved in a domestic abuse case, but not even consider bringing in Colin Kaepernick for a look at quarterback. Take a look at some of these reactions from fans.

if Colin Kaepernick had beaten a woman instead of kneeled during the anthem he'd still be in the NFL right now.

Reuben Foster gets arrested three times this year for abusing women, and he's unemployed for less than 72 hours.

Colin Kaepernick doesn't stand for the National Anthem, and he's blackballed by the @NFL.

I think teams drew the wrong line in the sand.

Yo @Redskins you won’t give Colin Kaepernick a tryout but you’ll claim Reuben Foster?

Where’s the line in the Nation’s Capital?

Reason #328 I stopped following the NFL:

so you mean to tell me, rueben foster gets arrested AGAIN for DV, and finds a job less than 72 hours later? but colin kaepernick can’t even get a backup job? 🤦🏻‍♂️ @NFL is a joke man

Reminder, Redskins won’t pick up Kaepernick because he kneels.

Lol @Redskins for being okay with adding a domestic abuser to their team, but wouldn't pick up Kaepernick. This is a team that wanted to avoid a media circus with Kaep, but are okay with a media circus if it involves someone who hits his GF…………

So, Reuben Foster gets arrested three times this year for abusing women, and in less than 72 hours he is signed by the Redskins. Kaepernick doesn't stand for the National Anthem, and he's blackballed by the @NFL. Yeah, that makes sense.

With the Redskins lacking depth at quarterback after starter Alex Smith’s horrific leg injury a couple of weeks ago, one would think the team would at least consider a guy who has had success in the NFL in Colin Kaepernick. Unfortunately, it seems as if the former Niners signal-caller won’t get that chance, yet a guy like Reuben Foster — baggage and all — gets scooped up within 72 hours of his arrest. The NFL is so messed up.

Kaepernick and the NFL are currently going toe-to-toe in a collusion case with the quarterback believing he’s being blackballed by NFL teams. I won’t say this latest example is the cherry on top that it’s proof, but, I mean…