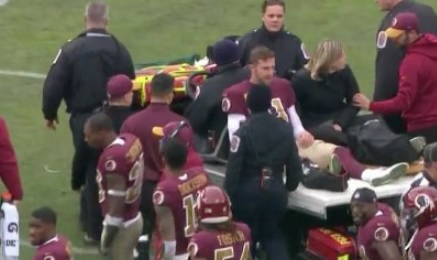 During the offseason the Washington Redskins made a huge commitment to make Alex Smith their QB.

Smith will make $40 million this upcoming season, which includes a $27 million signing bonus, according to the report.

The deal also includes $71 million in guarantees for injury, meaning Smith is under contract for five years and $111 million.

Smith made $10.8 million in base salary last season.

Unfortunately for the Redskins it appears that Smith’s season is done after he suffered a gruesome injury in his game against the Texans.

Potential bad news for the #Redskins: QB Alex Smith suffers what looks to be a very serious leg injury. He’s been carted off, air cast on his leg, and Colt McCoy is in.

#Redskins QB Alex Smith is being carted off with an ankle injury. Looked bad.

Here’s the video of the injury but be forewarned that it is very graphic.

I feel sick to my stomach for Alex Smith. This man does not deserve this. I feel terrible for him.