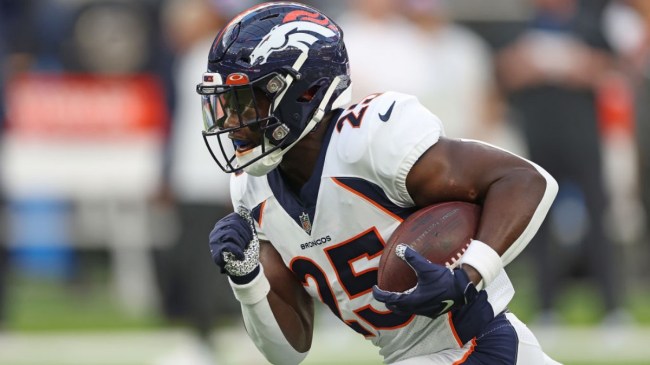 The Denver Broncos don’t have much going right for them right now on the offensive side of the ball. Their kicking is outscoring the rest of the team. Russell Wilson has struggled to find the end zone early in his time with the team. They lost star running back Javonte Williams to an injury.

It’s all piled up to equal one really bad offense that football fans are stuck regularly watching on primetime for some reason. Despite their struggles on that side of the ball, the Broncos made an odd choice in their loss last night.

They chose to only give Melvin Gordon, their most talented running back, 3 carries against the Chargers. It was a surprise in a game where the Broncos took an early lead and struggled to get yards on the ground.

He was asked about it after the game and didn’t have an explanation for why he didn’t play more.

Now their head coach has been asked about the situation and his answer didn’t make much sense. According to Nathaniel Hackett, Melvin Gordon didn’t play more because the Broncos didn’t have enough plays.

Hackett on Melvin Gordon: "We're going to have a conversation. … Melvin didn't do anything wrong. He didn't. We just didn't have a lot of plays."

It’s a strange explanation when Gordon only had a 16% snap share. The Broncos found enough plays to give Latavius Murray 15 carries and a target. Even Mike Boone had a 36% snap share, a carry, and 4 targets.

It seems an awful lot like Gordon was benched in favor of one player that was expected to be the Broncos 3rd string running back this season and another that the Broncos just signed from the Saints practice squad.

There must be some explanation for why Gordon didn’t play more last night, but “not enough plays” doesn’t seem like it’s the real explanation.