Streaker Hits The Field At Nationals Game, Hides From Security Inside Tarp Tube 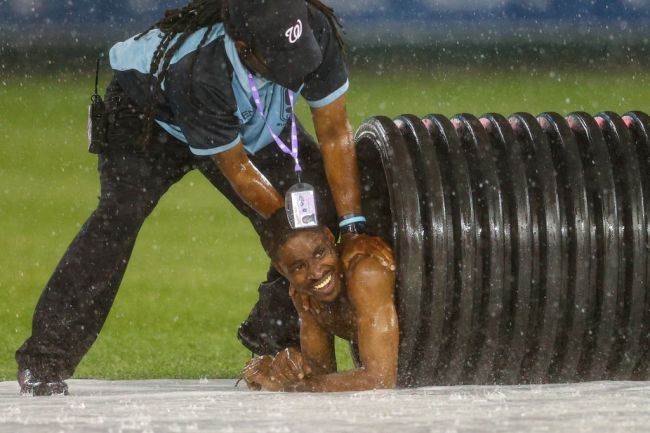 The Washington Nationals’ contest against the Cincinnati Reds in D.C. was suspended in the fourth inning when a torrential downpour swept across the area, but the rain didn’t keep a streaker from making his way onto the field.

The fan, completely naked, jumped over the centerfield fence and made his way to the tarp that was covering the infield. He learned the hard way that baseball tarps covered in water are the slipperiest surfaces known to mankind, and immediately fell to his back. Thankfully, a few fans were still inside the stadium and caught the whole thing on video.

The fall didn’t stun the streaker, however, he kept his head on a swivel so much so that when he saw security heading down the steps to come and get him he bolted for the tube and hid inside. He even played a little cat and mouse with the security guards going back and forth before he ultimately got caught.

As you can see from the picture above, he enjoyed every second of it.

As for the game, the Nats held a 3-0 lead in the fourth inning before the game was officially suspended. The game will pick up where it left off on Thursday as the teams will play a doubleheader.