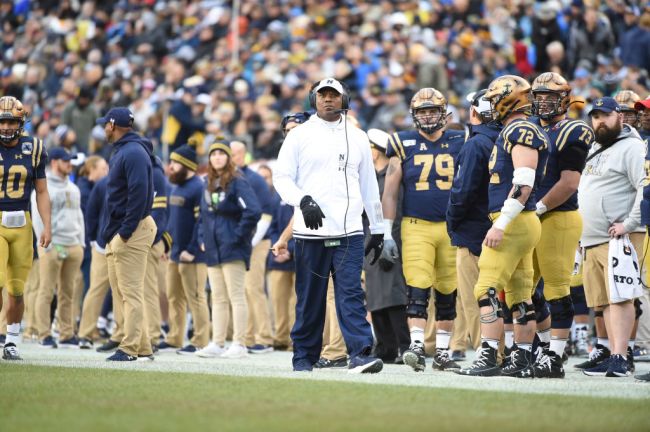 Navy’s football season has not gone to plan two games into the campaign. The Midshipmen are 0-2 on the year and have been outscored by their opponents, Marshall and Air Force, by a combined score of 72-10.

After scoring just 10 points in two games it’s understandable that the seat of offensive coordinator Ivin Jasper was starting to get hot. Then again, it’s just two games, there’s time to improve on the offensive side of the ball.

Navy head coach Ken Niumatalolo confirmed the report that it was the athletic director that made the decision to fire Jasper, which is a rather unprecedented move for an AD to make in the middle of a season.

“He wasn’t happy with the way things transpired and he’s the leader of the department.”

Perhaps Gladchuck realized that he had overstepped his boundaries, because Jasper has already been brought back on staff with the Midshipmen. It sounds like Niumatalolo went to bat for Jasper, who had been Navy’s OC since 2008, and had him brought back as a QB coach.

Niumatalolo now says Jasper is back on the staff coaching QBs, after Niumatalolo asked Gladchuk to reconsider.

“We have a better chance if he’s with us. … Losing him was not the right answer."

It’s a bizarre situation, and social media reacted to the back-and-forth news accordingly.

They did it, kinda! https://t.co/EBnARdWfZt

Weird deal at #Navy, where the athletic director fires the longtime offensive coordinator, who is then retained by the head coach in a demoted role. https://t.co/LFYyIr6idF

Ugh. What a disaster of a situation for good men. I'm not saying I know the football answer for Navy here, but the optics of this are terrible. https://t.co/CVbJJAlQVE

Coach Niumatalolo is beloved by his team, and this more proof of why he deserves to be. Navy is going through a bad stretch, but he's still standing up for his assistant coaches. https://t.co/lNnlC5PsWU