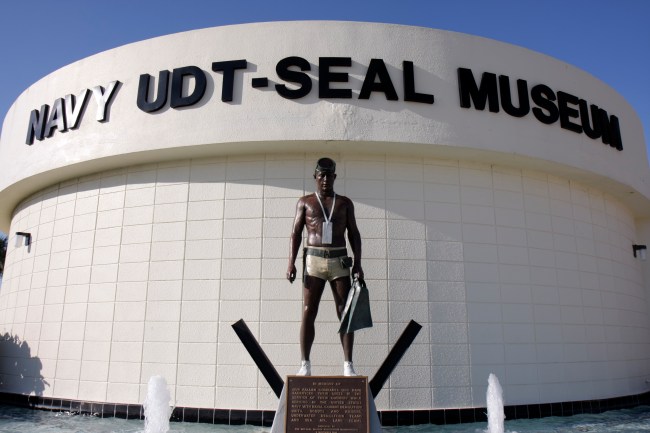 The Navy Seal Museum is going to have answer some questions after a disturbing video surfaced on the Internet.

On Sunday,journalist Billy Corben uncovered a video taken at the Navy Seal Museum in Fort Pierce, Florida that shows a Colin Kaepernick stand in getting attacked by 5 Navy SEAL dogs for not standing during the National Anthem during a fundraiser.

Another video shows the Kaepernick stand-in getting attacked by the dogs for not standing during the anthem.

People were obviously angry with the video and are calling for the Navy Seal Museum to issue a statement condemning the demonstration.

I used to think Navy SEALS were tough but man if they get this upset about a guy who didn’t stand during a song before a football game maybe they’re not https://t.co/QcZaCvy94S

Everyone involved in this should be ashamed of it for the rest of their lives. https://t.co/HSuT1etbjN

This appears to reflect stunningly poor judgement on the part of the @NavySEALMuseum. I hope they will quickly explain and appologize. https://t.co/9RYXU741L7

Rick Kaiser, USN (Ret) is the director of @NavySEALMuseum. Under his leadership, they felt that the best way to raise money was to set dogs on a black man fighting for equality as theatre.#BecauseFlorida https://t.co/fbET91OLAB

The @us_navyseals have to be better than this. So disappointing from a group all Americans should be able to hold in high regard. @USNavyCNO @USNavy @SECNAV https://t.co/GpQRrd85kd