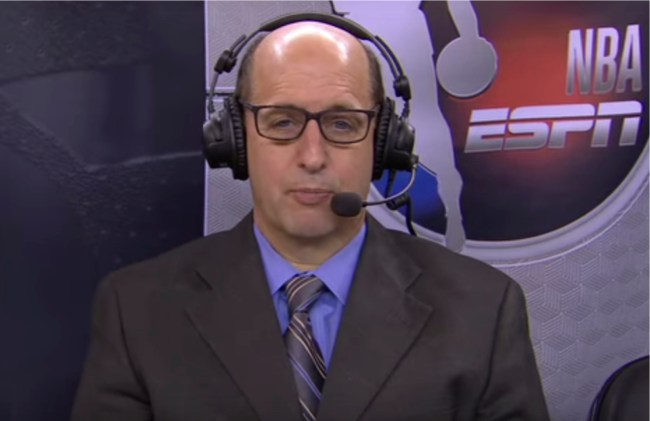 The NBA All-Star Game itself is nothing more than a defenseless exhibition that showcases the league’s most popular players showing off for a national TV audience. Even then, though, most of America isn’t even watching, because ratings for this year’s All-Star Game this past weekend in Charlotte were tied for a record low, which continues the trend of poor ratings for the NBA all season long, for whatever that’s worth.

The entire NBA All-Star Weekend is awesome, though, with the Dunk Contest, Three-Point Contest and the Skills Competition being the highlight of a three-day, mid-season fanfest that shows the lighter side of the league. It allows millionaire athletes to act like kids and be all buddy buddy.

That said, with the NBA All-Star Game being such a high scoring, open lane dunk fest that’s disgusting to watch, ESPN broadcaster Jeff Van Gundy thinks there needs to be some serious changes. But the outspoken Van Gundy isn’t suggesting a reward for the winning conference — like in the MLB All-Star Game — or implementing some wild or gimmicky rules, he’s talking about absolutely eliminating the damn thing altogether.

Van Gundy, the former NBA coach and now longtime television commentator for ABC and ESPN, said what he’s seeing now from the game is embarrassing and “a bastardization of the game that is beautiful to watch.”

“You can be a Division III player like myself and be All-Star MVP,” Van Gundy said. “All you have to do is drive in and shoot a layup.”

I would name All-Stars, I would have All-Star weekend, they have all these things, introduce them … the players are great, they should be applauded,” Van Gundy said this week, while preparing to coach USA Basketball’s team picked for the final two games of qualifying for this summer’s FIBA World Cup in China. “But to take this game and shoot 160 3s, it’s an embarrassment. It’s an embarrassment.”

“The equivalent would be like Major League Baseball, a guy hits the ball, you throw it to him at 70 mph because you’re not trying,” Van Gundy said. “And then you hit it and no one chases it and you just let a guy circle and score and you have unlimited runs. You’ve got to try.”

Although Jeff Van Gundy’s idea is probably the unpopular one, the NBA All-Star Game does have a problem considering the lack of defense, which leads to wide open threes or uncontested dunks. It’s part of the reason why, back after the 2017 contest that ended in a 192-182 score, a few players voiced their displeasure with the laid back nature of it, with NBA Commissioner Adam Silver saying he thought the game should be more competitive.

It’s doubtful the league would ever just nix the NBA All-Star Game altogether, but Van Gundy offers some strong reasons as to why there should be some changes with how the game is played, because just doing a backyard style draft to select teams isn’t making the thing more interesting or more competitive. There’s got to be something more.

1993 all-star game was more physical than the 2017 NBA finals. Barkley and Pippen were trash talking. Barkley was throwing elbows. No technical fouls. Refs just smiled and let them play. It was serious ball. #nba pic.twitter.com/n7tOvw8l1T

As shown above, back in the old days, guys took the game more seriously, but those days are long gone, so who knows what a realistic quick solution can be before next year’s game is played. Something has to be done to keep the All-Star Game watchable, right?