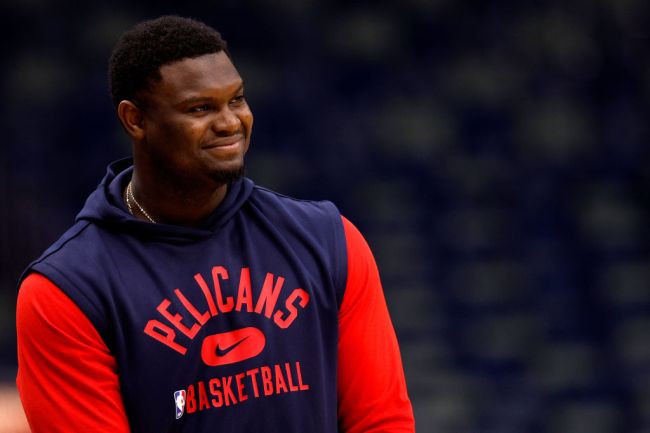 Drafting Zion Williamson with the first pick in 2019 hasn’t exactly worked out as the New Orleans Pelicans had planned.

He barely played in his first season, but was impressive in the 24 games he did manage to play in. Things got better in year 2 with Zion actually playing in 61 games and continuing to play well when he did.

Unfortunately, he then suffered a major foot injury. That injury created a lot of uncertainty throughout the 2021-22 season and unfortunately led to Zion never seeing the court during the season.

Now, he has a year left on his rookie contract and the Pelicans are in an odd position. Zion has impressed on the court, but has rarely set foot on it. According to Brian Windhorst, that has the Pelicans ready to offer Zion a huge contract extension, but concerned about offering him guaranteed money.

"The Pelicans, at this point are not willing to offer a full 5 year guaranteed deal… They will offer him a huge contract but will not guarantee all of it."

🔊 Brian Windhorst with Intel on the Pelicans' contract negotiations with Zion Williamsonpic.twitter.com/4dTbQ2uPvd

It makes plenty of sense for the Pelicans to be wary of giving a bunch of guaranteed money to Zion when they haven’t had much in the way of guarantees he’d be available when they need him so far in his career.

The Pelicans will just need to hope that Zion is open to whatever they do end up offering him as he’ll surely have plenty of suitors, despite his injury history, if he were to hit the free agent market after the 2023-24 season.