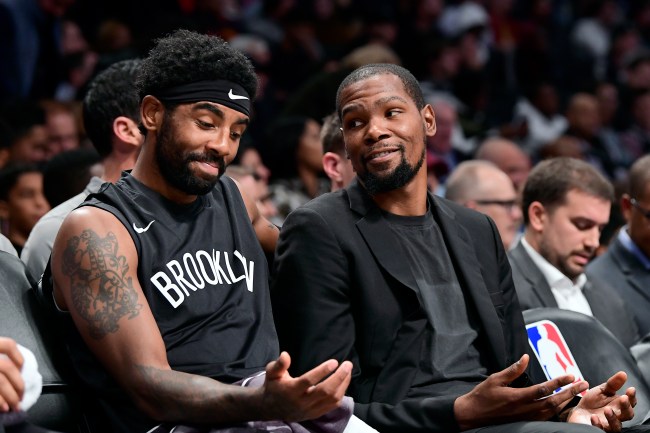 Kyrie Irving and Kevin Durant have yet to play in a game together so it’s going to take some time for the two players to figure out each other’s game.

On Saturday night, Kyrie and KD participated in an IG live where they discussed how they were going to run the Nets offense next season. The highlight of the discussion was when both players couldn’t agree on how many postups Kyrie should get during a game.

LOOL I’ll give them one season 💀 pic.twitter.com/MOpDMhBfXp

Irving: My footwork is impeccable, I have length, I’m able to shoot over top, hold the follow-through and I don’t see people. Do you not feel the same way?

Durant: I do sometimes, I’m just saying I don’t think that’s good for the continuity of our offense if our point guard always wants to be underneath the rim.

Irving: What about 7 postups instead of 8?

Durant: I mean we negotiated, I thought we was going to do 2 1/2 postups a game and the half one was like I throw you the ball in the post and you throw it right back to me.

Irving: I’m just saying that every play down I have a mismatch no matter who’s in front of me. I think with that mentally and having the post guard is a great balance for our squad.

NBA fans had immediate reactions to the two players disagreeing about how to run the offense.

LOOL I’ll give them one season 💀 pic.twitter.com/MOpDMhBfXp

At this point the Nets might mess around and include Kyrie in that package for Harden https://t.co/vbnSAfdt5Q

The Nets are going to be the richest of texts https://t.co/FTphraOJRC

KD passive aggressively throwing Kyrie under the bus after a game by February 😂 https://t.co/iwH97dqRiG

KD already thinking about playing with Wall,Wood,Boogie in Houston. That KD-Harden swap gonna be incredible. https://t.co/1ntWUuPwZO

KD’s gonna kill Kyrie before the end of the season. https://t.co/b5bBaP7IP9

kd on the phone with rockets coach rn like “do it.” https://t.co/3oGQN5cONR

KD is in trouble..oh well let’s see how this team plays out.. https://t.co/sbg6xEG1jT

Dude is full of himself holy shit man https://t.co/KAq9cofwPn