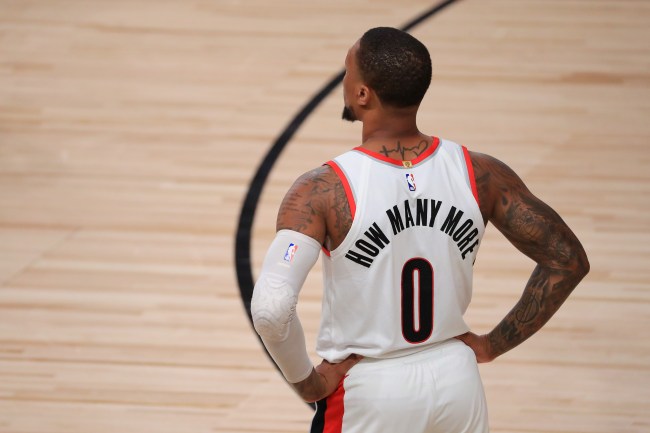 With the NBA Playoffs in full swing inside of the “bubble”, the realities of the outside world might appear to be distant. However, that doesn’t seem to be the case considering some of the reactions we’ve seen from players regarding the shooting of a 29-year-old black man named Jacob Blake, who was shot in the back seven times by officers in Kenosha, Wisconsin.

As the NBA as a league has voiced its support for the Black Lives Matter movement — with the phrase appearing on the courts inside the bubble — the players are starting to wonder if playing the NBA Playoffs has become more of a distraction than anything else. That’s led to some prominent players even considering boycotting upcoming games to try to avoid taking attention away from the BLM movement.

According to several reports, two of the players are Fred VanVleet and Norman Powell of the defending champion Toronto Raptors, who are getting set for a 2nd round showdown with the Boston Celtics in a couple of days. Both have, allegedly, discussed sitting out games.

Norm Powell and Fred VanVleet have both said that there have been conversations about boycotting. There is frustration that messages aren't getting across.

VanVleet cited frustration over the NBA’s the lack of change that’s happened since the NBA Playoffs began, with police brutality still occurring and that nothing’s really changing.

Fred VanVleet: "I was pretty excited and then we all had to watch Jacob Blake get shot yesterday. That changes the tone of things…It's just starting to feel like everything we're doing is just going through the motions, nothing's changing."

Powell says nothing changes until someone does something dramatic, and then it gets turned around (e.g. Black Panthers). "How do we demand more now? How do we formulate a plan to create change, and make it happen immediately? Because we've talked enough about it."

As for the players’ coach, Nick Nurse, he has encouraged his guys to speak out about the ongoing issues and even supports their threat of boycotting games during the NBA Playoffs. Although Nurse did cite that playing games gives them a bigger platform to silently protest, if taking some time away from basketball is what guys need most, he’s OK with that.

Nurse says if players don't feel like playing, or talking ball, or need a break, that's OK. "The priorities may be different for some guys, and I'm certainly willing to take as much time, cancel things that were basketball-related, whatever to make sure these guys are OK."

The Toronto Raptors aren’t the only team interested in boycotting games in the NBA Playoffs, though, as their upcoming opponent, the Celtics, also have at least one player who thinks it’s time to refocus the attention on the Black Lives Matter movement. Here’s what Marcus Smart had to say about the issue.

Marcus Smart was asked if thinks a potential boycott is warranted to get the players heard: "Definitely. Something has to be done, and right now our focus should not be on basketball."

Now, boycotting the NBA Playoffs would be a major statement, if even done by only a few players. It would bring the focus back on the Black Lives Matter movement, while showing support for Jacob Blake and others who have experienced senseless police brutality.

We’ve already seen the Detroit Lions cancel practice this week to protest the shooting of Blake, and, while that was a strong statement that showed unity in pro sports, actually having NBA players leave the bubble and skip meaningful playoff games would be a whole different level. And, hey, if it really leads to a change, all of us should be in support of players/teams doing this.