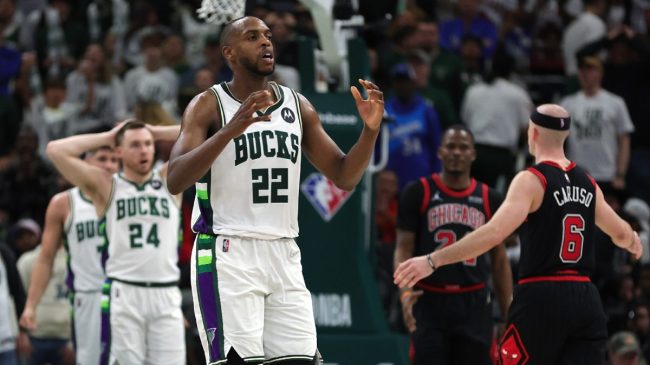 The Milwaukee Bucks’ NBA title chances took a massive blow in Game 2 of their first-round matchup with the Bulls.

The team lost its second leading scorer behind Giannis Antetokounmpo, as Middleton averaged more than 20 points a night in the regular season. The forward also ranked third on the squad in both steals and assists, helping the defending champs win 51 games.

Luckily, the absence didn’t hurt the Bucks in their opening series with Chicago.

In three games with Middleton out of the lineup, Milwaukee went a perfect 3-0, winning each contest by double figures. Now, though, the competition stiffens.

The Bucks will have to face No. 2 seed Boston, who’s fresh off a series sweep of NBA championship contender Brooklyn. And on Thursday, the team received some bad news on Middleton’s playing status.

Khris Middleton is likely to miss the entire round two series, and possibly more.

The left MCL injury of Bucks All-Star Khris Middleton is a Grade 2 sprain and he is expected to miss the entire second-round series vs. Celtics, sources tell @TheAthletic @Stadium. The recovery of Grade 2 MCL places a potential Conference Finals in jeopardy for him as well.

NBA insider Shams Charania reports that Middleton suffered a Grade 2 sprain, putting an immediate return to the court in doubt. Charania says that the forward is likely to miss the entire series with the Celtics, and possibly a Conference Finals matchup if Milwaukee advances.

It’s a big blow for the Bucks, as Middleton is a glue guy that keeps the team together.

Now, teams will focus more on leading scorer Antetokounmpo as they look to lock down the Milwaukee attack. Making things worse, Middleton has had success against the Celtics in the past.

Over the last four seasons, Middleton is averaging a tick under 20 points a night versus Boston. That includes a 19.2-point output in NBA Playoff games.

Milwaukee will need to find out how to replace that production in a crucial round two series.

With a key piece of the Bucks’ lineup going down, the NBA world has been quick to react to the unfortunate update on Middleton’s injury.

Middleton was a Celtics killer. Dude would turn into Kevin Durant against them for whatever reason. This is a devastating loss for the Bucks. https://t.co/3zGSynAgZX pic.twitter.com/CbGWGf62zj

Beating the Bucks is still a huge task, because they are that good. But…boy did the Celtics ever catch a break here. Middleton has been a Celtics-killer ever since he came into prominence with Milwaukee.

It's up to Boston to play well enough to take advantage of his absence.

We’ll see Giannis is able to lead the Bucks to victory without his wingman. Game 1 will tip off on off Sunday in Boston.