NBA Fans Love The Heat’s New Throwback Uniforms, Are Confused By The Rockets 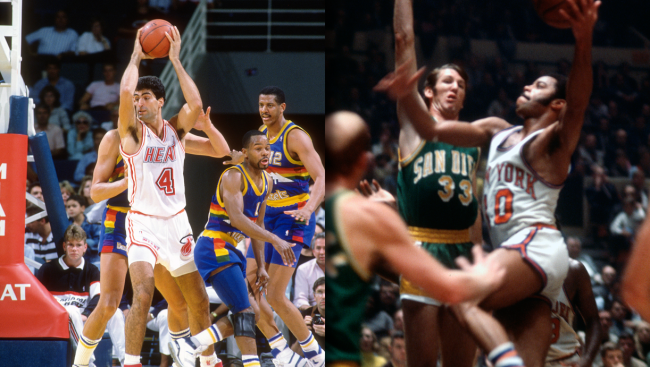 The Houston Rockets and Miami Heat unveiled new throwback uniforms for the upcoming season and NBA fans are absolutely loving them.

That is, if they aren’t confused by them. More on that in a moment.

On Wednesday, the Miami Heat revealed that they were going to be throwing it all the way back to beginning with throwback uniforms from the franchise’s NBA debut in 1988. They will mark the Heat’s 35th year in the NBA.

Our Classic jersey is back for the 35th season of HEAT Basketball. pic.twitter.com/BOXAOGOfR1

The Heat will be wearing these new fits for 20 games in the upcoming season.

A closer look at a Classic fit. pic.twitter.com/nzG2XRonWV

For all the oldheads out there, this means bringing back memories of that original Heat squad made up of players like Rony Seikaly, Pearl Washington, Jon Sundvold, Darnell Valentine, Kevin Edwards and Grant Long.

The Houston Rockets also unveiled their throwback uniforms for the 2022-23 NBA season. Theirs will be honoring the original Rockets teams that played in San Diego from 1967 to 1971.

Greatness in every thread. pic.twitter.com/H9tpzrqwgP

Houston will also be paying tribute to Rockets legend and Hall of Famer Elvin Hayes who was drafted by San Diego.

Elvin Hayes was the original basketball superstar in the City of Houston and has a lasting legacy with not only the @NBA and the @HoustonRockets, but the @UHouston as well. We’re excited to honor Elvin and his family this November when we retire his jersey at @ToyotaCenter. pic.twitter.com/mCz0u5hJHo

Fun fact #2: The San Diego Rockets entered the league at the same time as the Seattle SuperSonics, the team whose uniforms many fans are confusing with these new Rockets throwbacks.

those shorts arent even the ones they rocked during that time, its literally the Sonics shorts 🤣🤣

Australian fans love them though.

As do fans of Brazil.

Thanks for releasing kits for Brazilians

They are also bringing up bad memories for poor Sonics fans who are still waiting and hoping for the return of their NBA team.

The Seattle Super Sonics didn't die for this

(and before you pompous know it alls fall in my mentions, yes I know the San Diego Rockets story but people will think of the more recent Sonics that got screwed out of a NBA team https://t.co/yiluCqc1I2