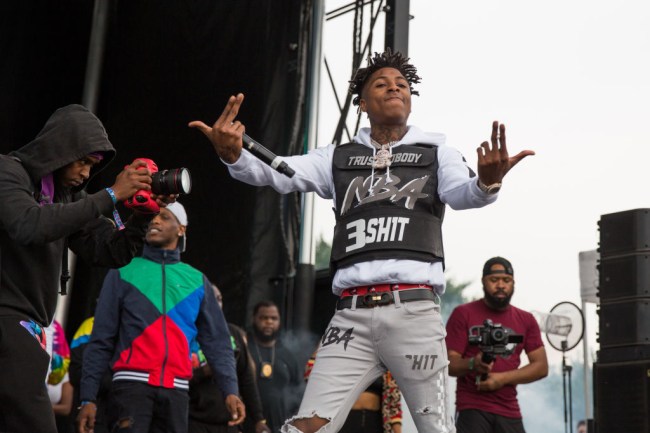 There are unconfirmed rumors that NBA YoungBoy slid in the DMs of Kyle Kuzma’s girlfriend. A screenshot of the reported interaction between Kyle Kuzma’s alleged Aussie girlfriend and YoungBoy Never Broke Again leaked online Thursday, and it appears as though the New Orleans rapper’s sauce game is lacking.

#RoommateTalk posts are 100 percent user submitted, and we cannot confirm with 100 percent certainty the validity of these claims. Sip wisely Roommates! 👀☕️ _________________________________ Dear TSR, I got some tea on NBA Youngboy that ya’ll really need to know! So my girl Nicole’s been dating Kyle Kuzma from the Lakers low key for a minute, like since the summer when he was in Australia. So anyway, I guess they took a lil break but they’re back now and guess whose been ALL UP in her messages? NBA Young Boy. I wasn’t going to say nothing but I remember when y’all posted he had like two girlfriends or something like that. _____________________________ Anyway, he slid in Nicole’s text messages tryna smash even though he knew she was dealin’ with Kyle. He started texting Nicole and tellin’ her all about the money he has and how she needs to stop messing with them lame athletes and get with him instead. ____________________________ But when my good sis wasn’t trying to mess with Young boy like that, he started tripppppnnn’! Started calling her out her name, dissin’ Kyle and talkin’ ‘bout his charges and how he could have her kicked off the premises if they ran into each other. I got the screenshots of they conversation and everything! I just thought ya’ll should know about this cause he tried to do my girl dirty. ——————————- Signed, I already know I’m nosey so hush 😂

NBA YoungBoy referenced the Los Angeles Lakers’ power forward and allegedly told the Australian Instagram model to “enjoy these lame ass athletes” after she rejected him by claiming that she is “a relationship type girl.” After being spurned by the model, the Baton Rouge rapper informed her that she would be “kicked out” if they’re ever at the same place.

Shiraz replied that YoungBoy would be the one booted if they were ever in the same place. To which YoungBoy responded by bragging that he has “two murder charges” on his record. Nothing turns on a woman you just met quite like being braggadocious about killing people.

Bra NBA Youngboy got the worse sauce I ever seen😂😂😂 pic.twitter.com/jU0K0d0h0b

U.S. Marshals arrested NBA YoungBoy before a concert in Austin, Texas. The rapper was accused of shooting a group of people in Baton Rouge. He was charged with attempted first-degree murder and was incarcerated from December 2016 to August 2017. YoungBoy, real name Kentrell DeSean Gaulden, had his 10-year prison term suspended and was given three years of active probation for the drive-by shooting.

In May, NBA YoungBoy was connected to a shooting outside a Trump hotel in Florida. Witnesses claimed that the hip-hop artist may have been the target of the shooting outside the Trump International Beach Resort in Sunny Isles Beach, Florida.

One we put out that #NBAYoungBoy was out here rolling around with a potential new boo, the #Roommates were quick to dig up the artifacts and point out that she’s also #KodakBlack’s ex!! #Roommates, what are your thoughts? (📸: @lorealluchi)

There is no proof that Shiraz is actually dating Kuzma, especially since there are no photos of Nicole on his Instagram. In August, there were rumors that Kuzma was dating Shiraz.

Nicole, who lives in Sydney and LA, is a huge basketball fan who has worked for ESPN and Sky Sports in the past. Nicole is also an Instagram model that has over 212,000 followers.

Shiraz was seated courtside at a Los Angeles Lakers game two weeks ago, which made many believe that Kuzma provided those nearly-impossible-to-get tickets.

Kyle Kuzma’s Ex Nicole Shiraz Sitting Courtside at Lakers Game as Rumors of them Getting Back Together Swirl https://t.co/dxoBV5L5qb

Here are Shiraz and a friend at the Qudos Bank Arena in Australia three weeks ago. They were there to watch the Sydney Kings, which are an Australian men’s professional basketball team in the National Basketball League (NBL).