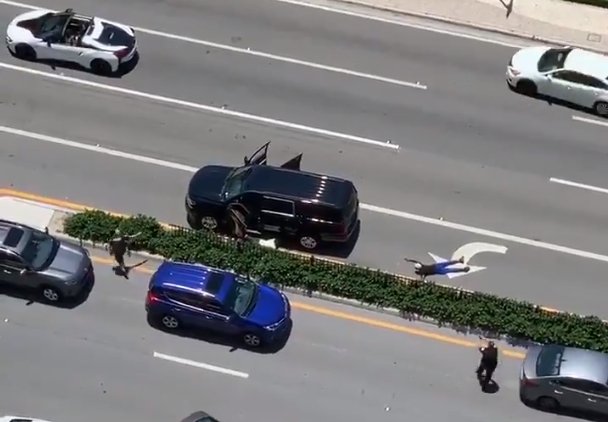 Video shows the scary scene seconds after the shooting where police quickly apprehend a suspect near the Trump hotel at 18001 Collins Ave from around 2:30 PM. There are rumors that the shooting escalated from a road rage incident, but that has yet to be confirmed. The shooting is said to have gone down at the Alamo Rent A Car along Collins Avenue and may have involved NBA Youngboy AKA YoungBoy Never Broke Again.

Video of the aftermath was shared on Twitter with the caption: “pretty sure someone just tried to do a drive-by on @GGYOUNGBOY.”

pretty sure someone just tried to do a drive by on @GGYOUNGBOY #shooting #miami @CBSMiami pic.twitter.com/oPcTWzc0ke

The witness clarified that he had not actually seen NBA Youngboy. “NOT 100% SURE IF IT IS ACTUALLY YOUNGBOY I HAVE JUST SEEN HIM EVERYDAY AT MY HOTEL AND HE’S THE ONLY FAMOUS PERSON STAYING HERE!”

NOT 100% SURE IF IT IS ACTUALLY YOUNGBOY I HAVE JUST SEEN HIM EVERYDAY AT MY HOTEL AND HES THE ONLY FAMOUS PERSON STAYING HERE!

There are rumors that a gunman shot at NBA Youngboy but missed and hit his girlfriend. Then NBA Youngboy’s bodyguard shot and killed the shooter.

Reports are saying NBA Youngboy was shot at and his girlfriend got hit then his bodyguard may have killed the shooter. Here is police responding to the scene pic.twitter.com/HzofZpN0LX

NBA Young Boy was shot at and the girl he was with got hit but he’s okay. The shooter was shot in the head by NBA Young Boy’s bodyguard according to witnesses on the scene in Miami! pic.twitter.com/mZ4mNluqST

President Donald Trump’s hotel near Ft. Lauderdale was immediately placed on lockdown. Police have arrested two of the three suspects and they are currently in custody.

NBA Youngboy, whose real name Kentrell DeSean Gaulden, is in the area because he is scheduled to perform at the Hard Rock Stadium in Miami Garden for Rolling Loud Miami, which is only 30 minutes away from the Trump hotel.

Rapper YoungBoy Never Broke Again was engaged in a beef with rapper Tekashi 6ix9ine’s baby mama, Sara Molina. In an interview with hip-hop podcaster Adam22, Molina said that NBA Youngboy slid into her DMs, but not for the reason you’d excpect.

“He sent me a video and cursed me out,” Molina said. “Someone asked me on my [Instagram] Live like, ‘What do you think of YoungBoy’s music?’ I think he’s disrespectful so I said, ‘I think he’s an angry little boy.’ Then he hit me up like, ‘Stop talking ’bout me bitch’ and I was like what?”

YoungBoy Never Broke Again responded by saying he doesn’t know who Sara Molina is and never communicated with her.

#nbayoungboy says he doesn’t even know #tekashi69 baby Mama #sarahmolina . |#adam22 (view a few post before this one)