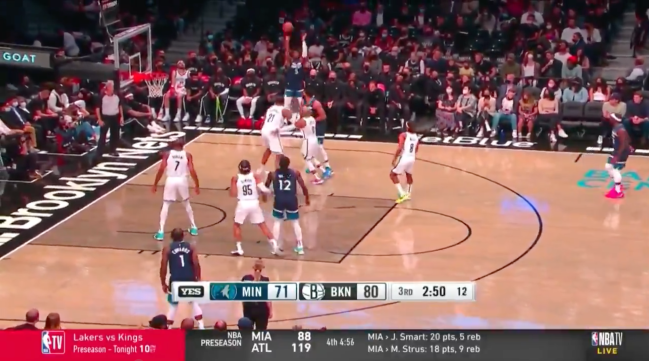 The start of the NBA regular season is just four days away and basketball fans are extremely upset with NBA TV. The league-owned network is operated by Turner Sports and will broadcast 107 games this season.

However, if they don’t change the layout of their broadcast, they might not get the viewership that they hope for.

As many people across the internet have pointed out, NBA TV’s bottom ticker causes the game feed to be scrunched. C.J. Folger pointed out the difference between the league’s broadcast and the local broadcast.

It might not be something that you pick up on right away, but once you do, the contrast is pretty staggering.

Back to back look at the same play with the NBA TV ticker pushing the picture up and what the broadcast should look like pic.twitter.com/DF7lGT7x7H

This has been the case for a couple of years, and yet, NBA TV refuses to find a result. Perhaps because their game is broadcast nationwide and the local broadcast is not available outside their specific regions, NBA TV does not care?

They must know that their games are not available elsewhere, so people will tune in anyway. It’s the only logical conclusion, because people have been complaining for years.

Here are some of the reactions online from throughout the years as people are being reminded again this season of just how terrible that it is:

@nbatv What do we have to say to convince you that squashing the image to fit in the gigantic scroll on the bottom is bad form. It looks stupid. Everyone looks squished pic.twitter.com/63vxOShLLh

@NBATV why stretch the broadcast cam and change the aspect ratio just to fit an unnecessarily big banner that displays other scores and info? The broadcast looks horribly stretched pic.twitter.com/YFhGm0AdXF

@NBATV this is awful. What the heck? Wasted space EVERYWHERE in the score AND ticker. Both on the bottom but not attached. Wildly disruptive to the viewing experience. 2 stars. pic.twitter.com/PXtib3sR4u

Dec 2020. Yet another season that @NBATV insists on distorting the entire game broadcast image to fit a score ticker at the bottom of the screen. I beg you yet again. For the love of correctness and sanity. Please stop ruining my beloved game viewing experience. Thanks. pic.twitter.com/x9u8Hh6eFs

NBATV needs to fix its aspect ratio. The bottom ticker constantly squishes the screen. It makes Zion look like Danny Devito. The simple fix is just to crop the borders, and it would make for a more enjoyable TV experience.

The size of the ticker on @NBATV is absurd! Messing with the aspect ratio for a giant banner that isn't even fully used! pic.twitter.com/jgTl2zsu8Y

@NBATV it’s 2020. Can you PLEASE fix the way your station looks? There IS a way to have a ticker and NIT squeeze your picture. I’m begging you…it’s a really bad look.

NBATV has somehow still not addressed their aspect ratio. How have you allowed this for so long @NBATV https://t.co/jrfU401EZD

If history is any indication, we will not get a solution for the terrible aspect ratio this season. NBA TV seems to value its ticker over a proper broadcast.

However, people are sick of it. Perhaps if we keep tagging the network with relentless frequency, maybe — just maybe — they will get with it?