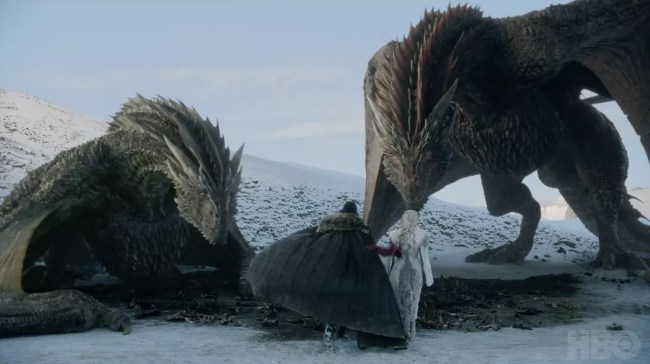 Wanting to get in on all of this week’s Game of Thrones fun, what with the season 8 trailer finally dropping on Tuesday, the folks over at NBC Sports Chicago tried to make a clever Thrones-related meme tweet about their beloved Chicago Bears.

It did not go well, and folks on Twitter, as they are wont to do, let them know all about it.

You’ve got two dragons, one being presented by NBC Sports Chicago as Khalil Mack and the other as Akiem Hicks, staring down two puny humans presented as Aaron Rodgers and Kirk Cousins. An intimidating image, right?

If that was all there was to it, all would still be well in the NBC Sports Chicago kingdom.

As Game of Thrones fans on Twitter were quick to point out, the symbolism NBC was trying to convey falls apart when you realize the characters in the image are Daenerys Targaryen and Jon Snow – as in “The Mother of Dragons” and her nephew.

So, basically what they are saying is that Aaron Rodgers and Kirk Cousins pretty much control Mack and Hicks. Probably not the message NBC Sports Chicago was trying to convey.

At least they got some A+ reactions from the Twitter gallery…

Kirk Cousins is the mother of Khalil Mack and Akiem Hicks?

And Aaron is the rightful heir to the throne

you guys should watch the show before you meme through this

Please delete. This is embarrassing for #Bears fans everywhere. pic.twitter.com/cHyBuaFlBT

In the end, NBC Sports Chicago took all the ribbing, and their L, with good humor.

when you play the game of thrones, you win or you die pic.twitter.com/MYnoPCpm5Q