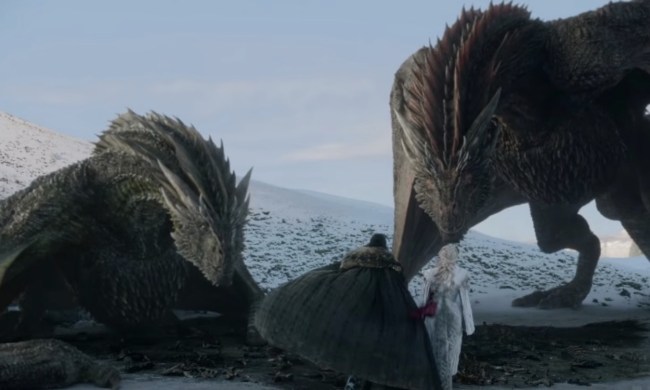 Unless you were stuck on a trans-Atlantic plane or living under a rock then you probably saw that HBO dropped the Season 8 Game of Thrones trailer yesterday. The trailer itself only runs 2 minutes and 2 seconds and when you cut out the scenes of HBO’s logos on the screen there’s really only 1min35sec of footage, but there’s a lot to unpack in a short amount of time.

I’d love to take credit for spotting all of the details in this trailer but I was too busy making memes for the BroBible Instagram yesterday to take a magnifying glass to this trailer. Instead, I’ll let INSIDER do the work for me here and I’ll give you a breakdown of this video below.

This gives us a look at all of the tiny details in this trailer that might not have seemed important at the time but could actually have a lot of bearing on Season 8. There are only SIX episodes on the final season so a lot is going to happen in a very short period of time despite the episodes ranging from 80 to 120 minutes in length. Now let’s check out this clip that breaks down all the tiny details:

Let’s unpack what we just saw in this video:

The trailer opens up with Arya Stark saying ‘I know death, he has many faces’ while running through the dark halls of the castle, clearly trying to escape some sort of attacker because she has blood all over her face and chest. This is a clear reference to the ‘Many Faced God’ she was serving while learning to become an assassin.

To me, the blood on her face and chest doesn’t appear to be hers but she is visibly disturbed so I might be reading this scene wrong. I think she’s either killed someone or walked in on a grizzly scene unfolding. It is unsettling to see Arya unhinged. She’s the calmest character in the show so something pretty serious must’ve happened. Then we see her holding a new dagger that appears to be made of Dragon Glass, the material used to kill the White Walkers.

Next, we see Varys hiding in the Winterfell crypts and he looks like he’s about to shit his pants with terror. I think we’re led to assume that there’s quite the attack taking place outside the castle walls at this time. Gilly is also in the crypts with her baby.

Flash forward and we see Harry Stryckland, who looks a lot like Jamie Lannister from the back, leading the Golden Company on ships across the Narrow Sea. We then get a quick flash of Barric Dondarion and Tormund Giantsbane, two characters that were assumed to have died at the end of last season in the battle where the Nights King took down the wall. They were standing atop the wall at this time and it was assumed they plummeted to their death.

Moving on, we see Cersei flanked by The Mountain who is a zombie and Maester Qyburn. After that we get Sansa and Arya reacting to the two remaining (non ice) dragons arriving in Winterfell. That jumps to Dany and Jon approaching the dragons whose heads are lowered as if the rulers are about to mount the dragons and ride them. Dany riding the larger Drogon and Jon riding Raegal.

Then we get a gratuitous Gendry shot forging weapons of Dragon Glass at Winterfell. This is a character that fans have loved forever and I just don’t get it. He’s not important. There’s no reason he should’ve made it to the end. He is a Baratheon, Robert’s bastard, but that’s all he has going for him.

Then we get a glimpse of Ser Jorah wearing what appears to be Heartsbane, the dragons glass sword that Samewell Tarly stole from his father. We sort of round out the trailer with Brienne and Jamie Lannister at Winterfell cutting people down in battle, probably white walkers, and everything appears to be on fire. It’s fire-fire, not that blue wildfire, so this is likely caused by the dragons or the soldiers started the fires themselves as a barrier against the white walkers.

That final bit about Cersei is interesting. The part about pregnancy is pointless. Why would the people of Westeros know/care about drinking wine during pregnancy? But the bit about her enjoying a glass of wine after vanquishing her enemies is intriguing because there is a twinkle in her eye and we don’t often see her very happy.

If you haven’t watched the trailer yet, here you go:

April 14th. That’s the day to mark on your calendars.