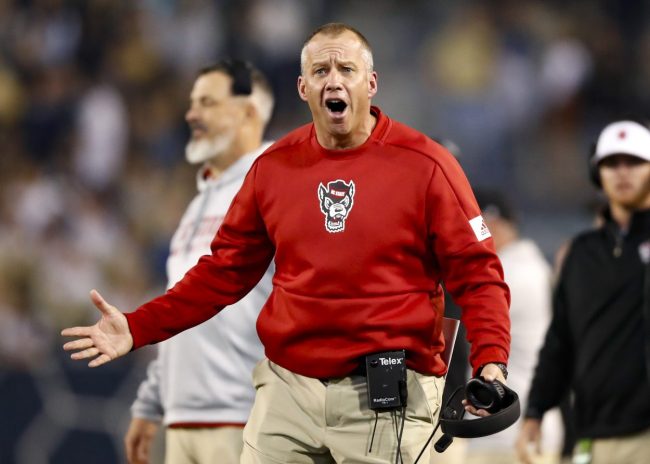 North Carolina State football was one win away from its second 10-win season in program history. However, due to COVID-19 issues with their opponent, the Wolfpack had their bowl game cancelled at the last minute and head coach Dave Doeren is not holding back his frustration.

NC State, scheduled to play UCLA in the Holiday Bowl on Tuesday night, had its game called off just four hours before kickoff. Per reports, the Bruins pulled a very classless move before withdrawing.

In addition, the bears from Westwood have caught a lot of heat for taking a trip to Sea World and visiting a famous naval ship docked in San Diego just days prior to the game. They were also believed to have known that they did not have enough players to play the game well before the cancellation.

Since then, members of the Wolfpack have expressed their frustration with the last-minute cancellation and NC State athletic director Boo Corrigan put their opponents on blast. And now, coach Doeren is going after the NCAA.

Not at the Holiday Bowl.

The NCAA is not ruling the game a forfeit by UCLA, and thus, N.C. State will not be credited with the win. Despite what the NCAA had to say, the Holiday Bowl presented the trophy to the Wolfpack and the school is crediting itself with the win in the official record books.

Doeren, upon arrival back in North Carolina, did not hold back on the decision. He laid into the NCAA with a hilarious insult.

Dave Doeren (@StateCoachD) on the NCAA not ruling the Holiday Bowl as a forfeit: “The NCAA stands for No Clue At All in my opinion. I don't really care what they say about it.” pic.twitter.com/SYjD5J3Tq4