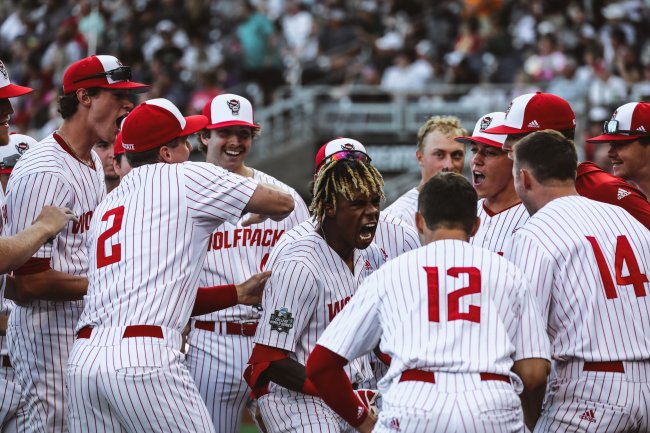 Vanderbilt’s Jack Leiter is considered the top Major League Baseball pitching prospect on the collegiate level and continues to do wicked things. At one point in 2021, the 21-year-old righty had 20 consecutive no-hit innings and 25 consecutive scoreless frames. He’s continuously pumping a terrifying 100mph in the postseason and it looks terrifying to face his fastball.

Leiter was working against N.C. State in his first-ever College World Series appearance on Monday night. Vanderbilt won its first game of the double elimination tournament over Arizona in walk off fashion and the Wolfpack won 10-4 over Stanford.

The first 4.5 innings of the second round meeting were scoreless and Leiter had retired the first 12 batters in order. Nine of the dozen outs were strikeouts.

Jack Leiter, K'ing the Side (again).

In the bottom half of the fifth, N.C. State’s Terrell Tatum opened the scoring with a MASSIVE bomb.

After breaking up the potential No. 1 overall pick’s perfect game to the moon, Tatum turned to his dugout and sent his bat to follow the ball.

On the other side of the mound, Wolfpack pitcher Sam Highfill was lights out as well. He allowed only two hits and two walks through 7.1 innings. His defense was helping him out.

Devonte Brown lays out to end the top half of the 7th.#CWS x @NCStateBaseball x 🎥 ESPN pic.twitter.com/n9W2sj1gnw

Leiter was still dealing as well. He allowed two of his three hits (with the solo shot) in the top of 7th inning and loaded the bases with one out. Two strikeouts later, his 13th and 14th, the Vandy Boys were out of the inning.

Both Ks came on 96mph fastballs, which was his highest velocity of the evening at more than 100 pitches.

A sigh of relief from Jack Leiter as he pitches his way out of a bases loaded jam.#CWS x @VandyBoys pic.twitter.com/ux9Tt25O6w

Nothing going for the Commodores in the top half of the 8th and Leiter returned to the mound. He allowed a leadoff single in the bottom of the eighth before recording the first on a Wolfpack attempt to move the runner.

His 15th strikeout was the second out of the inning and a pop fly ended the 8th. Leiter is going to make a professional organization very, very happy.

Jack Leiter has struck out 15 batters tonight against NC State, tied for the 2nd-most K by an SEC pitcher in a College World Series game all-time.

Leiter has 11 K on his fastball, 2 on his curveball, and 2 on his slider. pic.twitter.com/azuaxP8z65

Leiter’s performance was gusty, but Highfill and N.C. State closer Evan Justice were gutsier. Justice faced five batters and shut it down— allowing just one walk. The Wolfpack, in only their third College World Series appearance, pulled off the upset.

Monday’s game was an all-time classic and it moves Vanderbilt to the losers bracket. They, without Kumar Rocker or Leiter, will face Stanford in an elimination game. The Cardinal are red hot, having eliminated Arizona 14-5 earlier in the day.