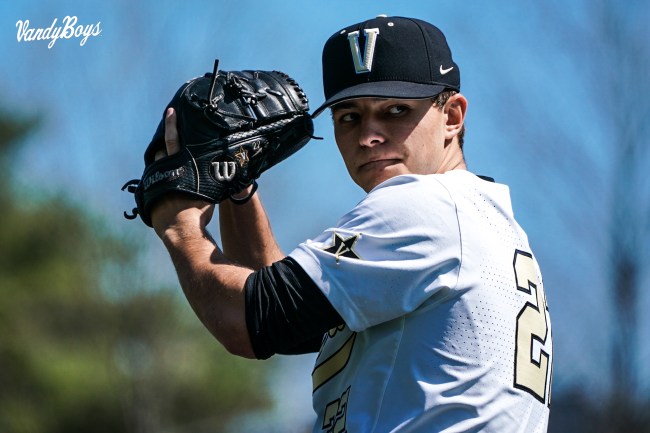 Vanderbilt pitcher Jack Leiter made his first-ever Southeastern Conference start on Saturday and walked the first batter he faced. Then he retired 27 straight, throwing the school’s fifth no-hitter in program history against No. 16 South Carolina. 28 batters up, 27 down. Ridiculous.

Leiter is projected by many to be the top pick in the upcoming MLB Draft. If he is not selected first, he will be drafted second behind his teammate Kumar Rocker. Rocker is the Commodores’ Friday starter and threw the program’s fourth no-hitter in a Super Regional outing against Duke in 2019. He also went eight innings with 14 strikeouts and only two hits allowed last night— no big deal. Both guys throw nasty stuff and make for a lethal 1-2 punch.

After what Rocker did on Friday, Leiter called his counterpart and raised him. Thought he had never pitched into the seventh inning during his short career in Nashville, the 6-foot-1, 195-pound 20-year-old threw 124 pitches in a complete-game, 16-strikeout gem.

He spoke about the performance in an interview after the game.

Vanderbilt is 15-2 on the 2021 campaign and have not lost with Leiter on the bump. As the son of 19-year MLB veteran Al Leiter, Jack knows what it takes to get the to big leagues and he is well on his way. He’s locked in all of the time.

One of my favorite things in College Baseball…

Leiter was pumping close to 100mph well beyond his 100th pitch of the night and South Carolina only made solid contact on a handful of at-bats. He will be back on the mound against Missouri next weekend before traveling to Baton Rouge to face LSU to open April.

Just for fun, here is some more of his cheddar.